A better full scan of the first 360 Quicktime VR styled sketch that I did back at Disney Interactive back in the 90's. 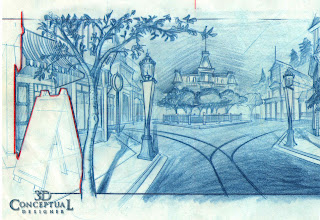 Here is a close up of the Left side of the sketch looking back at the entry and the train station. 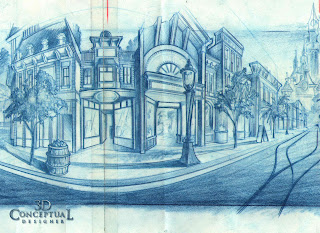 The Middle of the sketch is looking across Main Street USA at the Arcade. You can see Cinderellas Castle on the right there at the main Hub too. 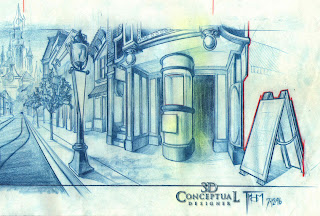 A close Up of the RIGHT side of the wrap with the Theater entryway there and a sandwich board I used as the 'seam' to link it together in a 360 like this..

This is my eighth post in my series on the Virtual Magic Kingdom [ VMK] project I did for Disney Interactive back in 1996-7, and with this post, I cover  last big HUB perspective wrap that I did in preparation for the project, Main Street USA.

I was originally hired as a freelance sketch artist and, Concept Designer, but after a month I was offered a 3D Art Director position on the project to direct the efforts to build this out, and happily took the offer and worked for them for just over a year.

This was also the first 360 sketch I ever tried, and the M.C. Escher technique I extracted from the books of his, definitely worked well. Here is the under drawing I did for this as a partial sketch.

I have this higher resolution scan for this hub, which was seen as a very small image posted early on, as seen here, but today I have isolated close up's of each part of the 40" wide drawing I did for Disney Interactive back in the 90's so you car review the details much better.

You may review my earlier VMK posts in these link-a-dinks: