Here is the first early pass at the final designed Skull logo for World of Tomorrow. 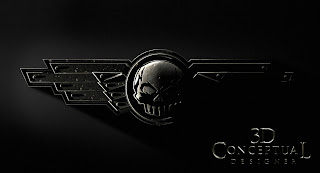 A fun side lit dark version with the big holding device we added in to lock in the wings to the skull a bit more for Sky Captain. 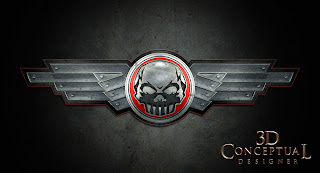 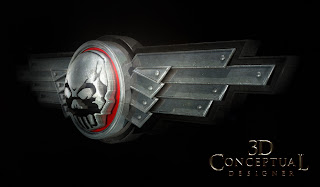 A side shot reveals I scaled the skull about 300% to deepen the shadow play.

Here is the Polygon view of the model for World of Tomorrow.

A 3/4 side view showing the angle on the wings.

This side view really shows the dome shaped face on the cut out skull.
Project Review
Sky Captain and the World of Tomorrow
PART I I

Today in this second posting for the work that I did for the film, Sky Captain, and the World of Tomorrow, while I was running the little 3D department at BLT back in 2002, I focus today on the skull logo development.

The design itself was provided by the brothers who created the film, and I was to dimensionalize the logo into an iconic logo for the posters.
The designs are obviously reminiscent of the Nazi symbolism, and the colors of black and red pretty much seal that up, and that was the direction that I was given. The logo represented the 'Bad Guys' in the film and it was used extensively on the robots and tanks throughout.

I built a few versions, but the main one had the skull cut into a sphere which is easier said then done especially all quads. This was one of the first times I used the Pro-boolean tools in 3DS and they helped the process out alot, as we had no time to sub-division the thing out.

Look for more in depth posts on this project, as I will be examining all the robots I built for the posters here in the months to come. You can get a sneak if you view my first post here.