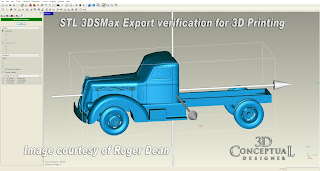 My 3D STL file was imported to verify scale for 3D Printing by my client.

The fender 3D file I made was used to create the steel plates for the buck for the hand hammered fenders as seen in the CAD build off my model. 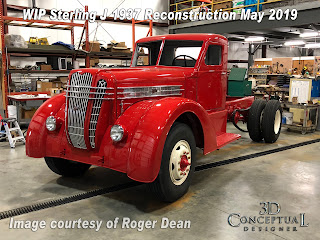 The first image of the actual build of the truck. This Semi is massive, a 6 foot tall worker is shorter that the front grill for scale. 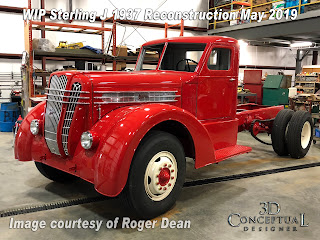 Moving around the beautiful build on this 1937 Sterling J utilizing the original cab as the single existing part that the rebuild was made around. 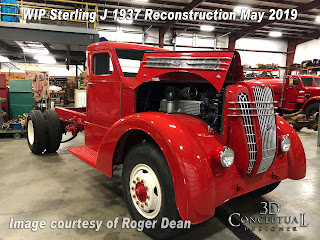 With the hood opened up a nice passenger side shot on this coach-build. 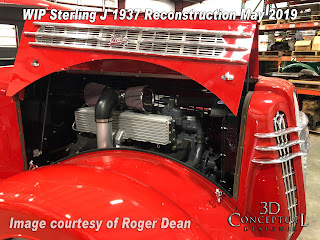 A bit of the 'Jewelry' with the iconic Sterling Script Logo on the side can be seen here. 3D print files were the most detailed and high-resolution for these parts I made in 3D for the sand casting process as the originals were made. 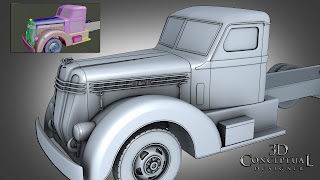 A re-post from PART I showing the 3D build I made. 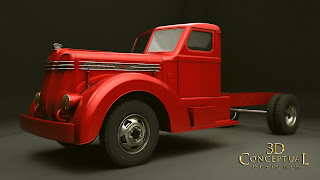 Another re-post from PART I Here is a color test

It has been 4 years since I created the 3D print file for the vehicle reconstruction of the 1937 Sterling J using  3D Printing technology for the new prototype pieces. Trained in Industrial Design Automotive at Art Center,  is was this training that I relied on to complete the base files for the build out.

Fast forward four years and I received pictures of the fresh build of the reconstructed Sterling J going to a show in Reno this Summer 2019 from Roger, and with his permission I am posting these today.

The 3D files were printing in foam for some parts, wax in others and cut into laser cut plates to build bucks so panels like the fenders could be hammered out by artisans the old school way.

The build is not complete but in this stage looks amazing and the team has done an absolutely amazing job.

I will have more posts covering the progress of this first Sterling truck, once it is complete.

You can view PART I showcasing my 3D Print file here.

Cheers, THOM
Posted by 3Dconceptualdesigner at 11:07 AM No comments: