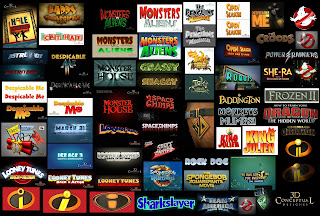 Posted by 3Dconceptualdesigner at 8:19 AM No comments: 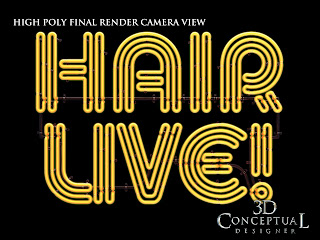 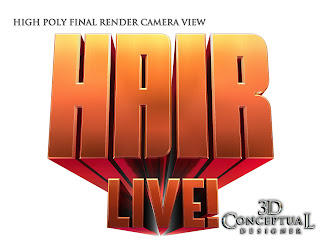 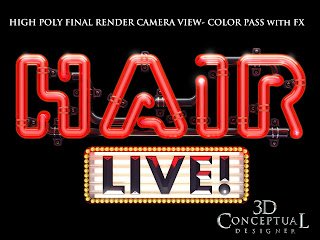 This 3D Logo I built for Hair Live has Thick Neon up top with a Theater Marque sign with chasing Light Bulbs below. This is the Color Pass with Post FX added glows 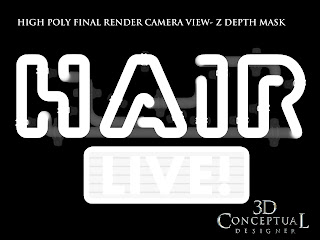 This is the Z-Depth mask that I can provided for distance based editing. 256 levels of grey-scale can come in handy for camera and saturation effects based on 3D space. Great for Fog! 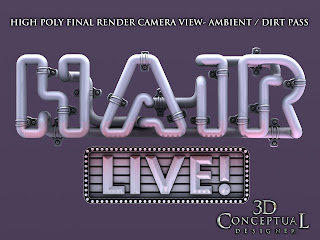 The Ambient Occlusion / Dirt render pass is a great post effect overlay for adding aging, , and gradients to the colors. By being a separate pass from the color-pass ,this allows my clients full control over the final image. 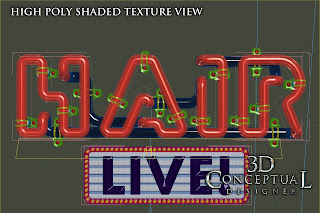 A Screen Grab of the final render scene geometry with all Sub-D models with two levels of subdivision. 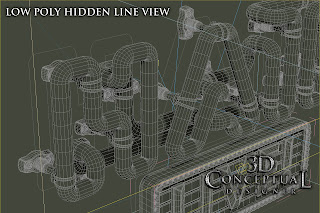 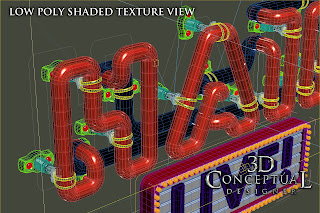 
Back in August 2018 Josh Mintz at Switch had me help out on the NBC Hair Live 3D Logo Design and execution for the upcoming special, that ultimately was cancelled.  I do hundreds of 3D Logos each year, and I do quite a bit of Neon.

I love doing neon, I do a lot of it. I love building out all the clips and little bits, along with the various parts in the Neon build itself,  from the glow inside to the outer glass to the painted black connecting glass behind the clear glass itself.

3D Design allows a fast way to build alternates as you can see with the above design I can do stacked one-line logos relatively quickly by moving around chunks of geometry.

I also did one alternate 3D Logo design of big metal block going back into 3D space in a shiny warm metal material.

I typically render out three passes minimum, with added renders always available as an option. 3D renders are Smart 3D Images, so they automatically have an Alpha channel saving the clients time and money.

I also include a Z-Depth pass which is a depth based grey-scale mask for adding post effects based on distance from Camera.

Cheers, THOM
Posted by 3Dconceptualdesigner at 11:09 AM No comments: 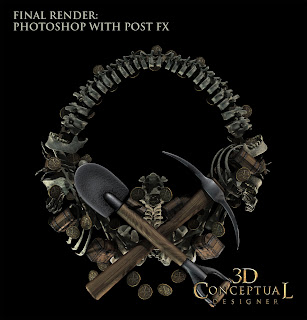 The final delivered 3D Illustration rendering[ multiple passes] for Switch to use for the History Channel Key Art for 2019. 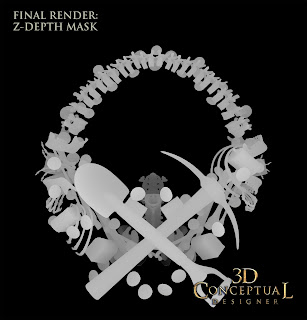 Here is a Z-Depth render pass. X. Y, and Z are the three dimensions in geometry , and Z is the distance measured from the camera in a 3D Scene from close to far. A very powerful mask , with many ways to use for a 2D Artist in Photoshop of After Effects. 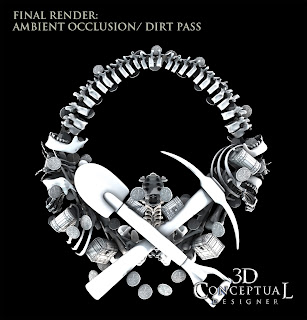 This is the Ambient Occlusion [ AO ]/ Dirt render pass. I use this as an overlay in Post to add depth , dirt , or just a bit of gradient to objects. Sometime I render multiple AO passes as various setting so I can get light and heavy amounts of the secondary dark color for more options for a client. 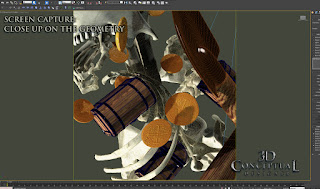 A random 3/4 close up view showing the 11+ Million face scene. Those coins were not bump-mapped, but a real 3D  displacement so the geometry needed good resolution ,  so they were the heaviest pieces in this scene 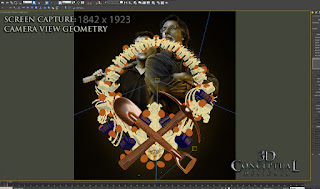 The Camera View showing the Geometry aligned with the 2D Mock up[ a cut down version of an earlier taller design I did. I use the image as a back plate to build to the clients comp exactly. 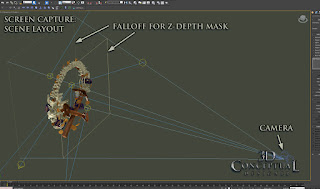 A 3/4 Perspective view of the 3D Scene in 3D Studio Max show a long lens as well as the multiple light sources. I point out the fall-off  planes on the camera, I use these to get the Z-Depth mask tight to all objects. 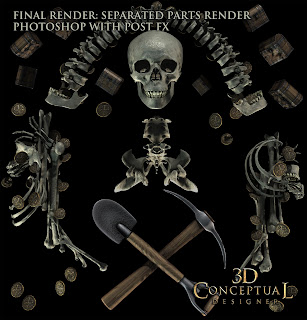 This render was all main groupings separate out into parts to they could add to or build their own comp from pieces. The Alpha Channel in the file makes all pieces pre-masked to save cost on the project. 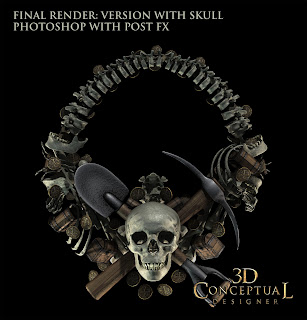 Here is the Alternate version [ Original Design] with the Human Skull front and center still. 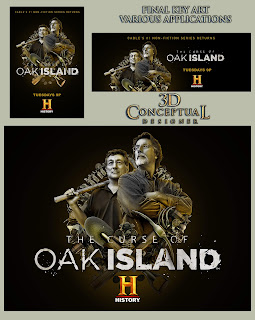 A quick Google Image Search brought up a few examples of its use this season.


I was called in by Josh Mintz at Switch to design and build out a 3D Design using elements from the series to be used as a holding device or crest for the comp highlighting the main Cast members.  human bones were the big element , as well as treasure chests, old coins , and  a few digging tools. I love working with this client as I do hundreds of 3D Logos each year, but 3D illustration is what I love getting as well, these projects allow me to sketch in 3D and design pieces of art , especially ones with multiple elements , so off I went.

When I create a piece like this for a client I first build out the various parts and mock up a basic layout. I do either a screen grab, or I do a low resolution render leaving off all post effects as well as turning off Anti-Aliasing[ a.k.a. AA ] so the render is quick for approvals.

Once the low resolution render is done I to a low resolution AA render to get a time estimate a for a final. For comps needing client approvals it is usually half the finish size in pixel width , each agency, and client is different, and for this one History Channel needed a 2500 pixel render to approve. Once it went to finish the final was 5000 pixels wide.

When I deliver a final layered Photoshop file, I typically render out three passes minimum, with added renders always available as an option.

3D renders are Smart 3D Images, so they automatically have an Alpha channel saving the clients time and money as the object comes masked to the pixel perfectly.

I also include a Z-Depth pass which is a depth based grey-scale mask for adding post effects based on distance from Camera. Great for Camera blurs , adding layers of fog or atmosphere, or de-saturation or saturation based on the object closeness.

The final pass is an Ambient Dirt pass which is a basic grey color with a dark dirt like material that 'finds the intersections' in the geometry and darkens them up adding either aging or just a nice shadow in the cracks and crevices. This adds to the photo-real style that can be adjusted better than in just a single render pass. This is a standard practice on my MGFX and AV work for trailers and 3D Animation.

The final Image also was delivered with a version with a Human Scull front and center, that was deleted late in the process. I also did a render pass of parts, where i move the 3D objects out so the can be grabbed with the Alpha Channel, and do a render of this so the Creative Directors can use them to add more pieces or build their own design with the pieces. This project , only the no-skull version was taken to finish at 5K resolution.

Cheers, THOM
Posted by 3Dconceptualdesigner at 11:07 AM No comments: