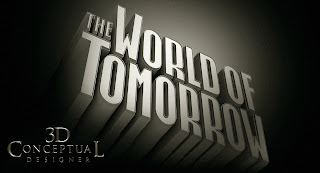 A reverse beveled face[ with an indented top] for this hyper extrusion on black for Sky Captain and The World of Tomorrow. 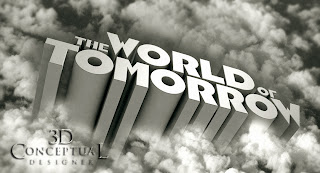 A Long extrusion through the clouds. Particle clouds were to part to push this up to camera, FUN! 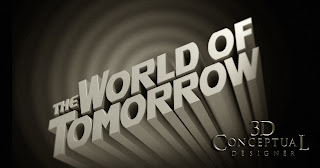 A style frame designed Logo with an animated sonar ring from behind it. 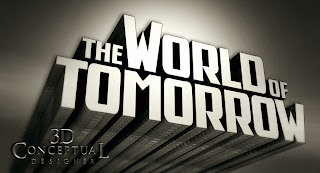 I textured the extrusion with windows to emulate a tall building to the font for this World of Tomorrow Logo design. 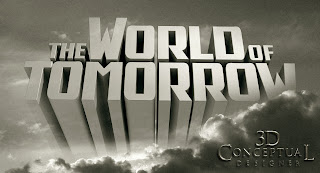 This view shows the logo with dramatic clouds and sun rays[ a fave!]

This is my fifth posting on Sky Captain and The World of Tomorrow, I have posted a bit of Motion Graphics work that I performed when I was in-house as the 3D designer over at BLT and Associates in Hollywood, CA, for the film World of Tomorrow[ Sky Captain].

The film was originally titled World of Tomorrow before Paramount changed the name, so our concepts were done with that in mind.

It was a simple task to do some sepia toned old styled logos as seen in the 1940's, so I hyper-extruded some text and created a few looks. Some on black and some coming up from the clouds. Alen Petkovic eventually presented a few looks animated in Motion Graphics and they h liked them, however with the name change came a look change as well. A fun exercise all in all though, enjoy the post.

You can see the other posts quickly below in these links:
PART I
PART II
PART III
PART IV