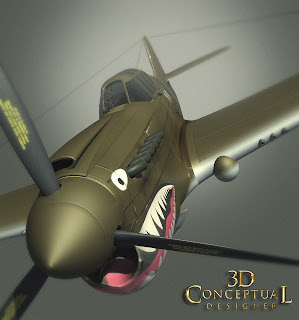 Sky Captain Coming at Ya! 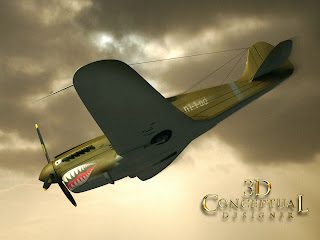 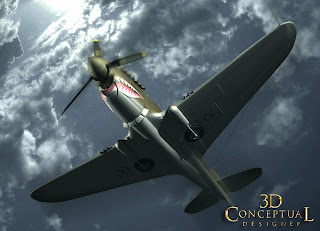 Zooming up in the modified P-40 from Sky Captain and The World of Tomorrow. 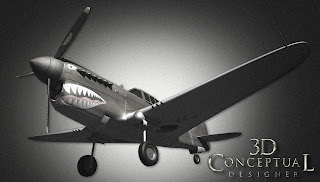 I built it linked so that the landing gear could deploy for some ground shots. 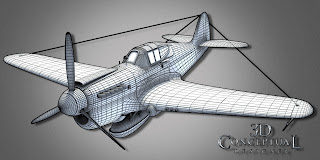 Here is the Polygon 3/4 front view of the 3D Model I built out to match the film for the Posters. 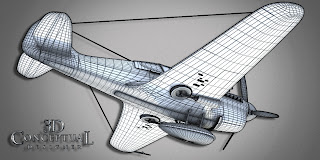 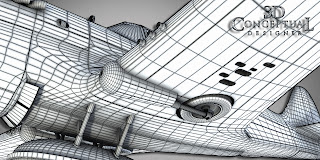 This view shows some close up details about the canopy and facing edge of the wings.

This is my third posting on the 3D illustration [ and a bit of Motion Graphics] work that I performed when I was in-house as the 3D designer over at BLT and Associates in Hollywood, CA, back in 2002.

World of Tomorrow was a very beautiful looking film with 40's era cars and robots and love the sepia aged look that the film captured. I built a bunch of items to use in the presentation posters, and one was the modified p40 Mustang that  the main character fly's in the film played by Jude Law, I posted some views here a few years back.

I found blueprints of the iconic WWII fighter plane, and had a green screen shot of the modified canopy from the shoot, so off I went and built this out.

The great advantage of 3D is that you have a sort of 'living photography', in that you can quickly adjust the lighting, mood, and look of the plane, once the time and investment is made to build it once.

The first image is always the most costly, since it requires the full build to do so, but every view after that pays for the job as it spreads the cost out, and you get the advantage of speed, if you have a multiple use needed for the asset.