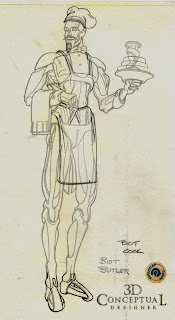 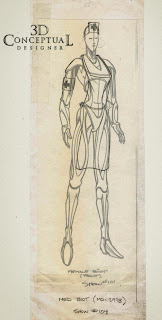 A Female B.I.O.T. Nurse[ Medical] robot from the TV show. 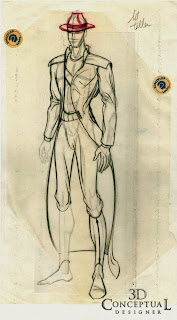 A Generic male body with a trench coat became a coat for Dr Jak. 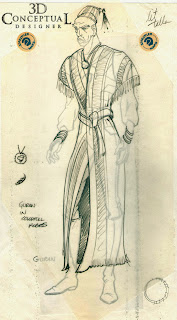 Here we see Guran in a Tribal Jungle robe [ Bengalla]

This is my 98th post for the work I did on the TV show, The Phantom 2040 from in the early ninety's, and I have posted a few overlay drawings that I did for some fashion designs I needed for the series.

As the Conceptual Designer and Art Director for the series, I came up with the overall look of the world, and that obviously included fashions worn by the main characters. I have a few friends who did that so I consulted them at the time and moved ahead.

What you see above are my overlay drawings for various outfits for characters including Guran, Dr JAK, and the various servant B.I.O.T.'s found on the series that I created these many various types of outfits for.

The "tall and thin" characters with wrapping, soft curved shapes from the Art Nouveau look was applied to all designs as well as the 2040 look developed in the architecture and industrial designs present in this fantasy world of the future to everything including what was worn or changed into foe the specific shows.