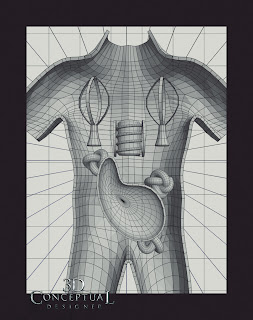 Here is the base 3D torso I built out for the perspective grid to sketch fast over. 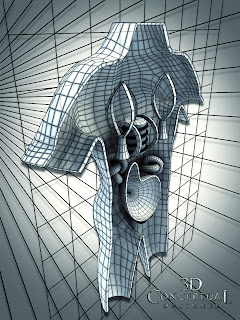 A 3/4 view showing the 3D base scene with the grids for perspective I built using a cone, and plane object. 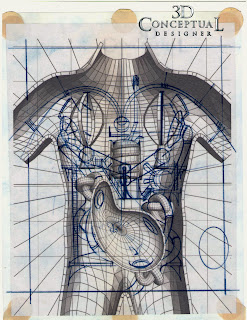 The first 2D Blocking over the copy of the 3D render, done on tracing paper. 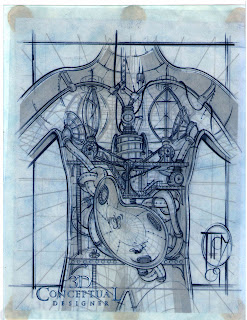 Here are all three layers, still taped together with the 3D render print first, the blocking, and ending with the velum final lines. 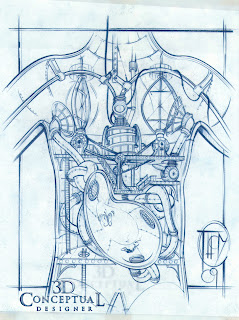 Here it is scanned hiding what is under the velum for shading. 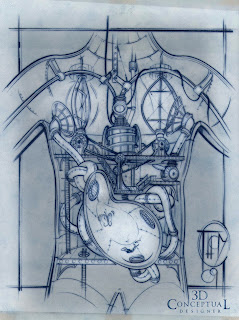 
Today I have posted my third part, in a series on the Production Design work I did for the Music Video Heart of Stone by the Raveonettes, and for today I am showing the 'behind the process', in the creation of this piece.

To start off, I had just 4 Hrs total to complete the task, including designing it out, and sketching a single image accurate in 3D space so a team of 3D modelers could build off the one sketch. They did have a bigger budget, but I was brought in at the 11th hour to 'put out a fire', so to speak and delivered theses designs this way in the time allotted.

To do this fast I started in 3D and built out a quick torso with a few main elements in there and did a quick grid render. I use 3D Perspective Grids in the same way I use 2D ones.

I printed the render out, and did a tracing paper overlay and blocked in the design. I then overlaid that with the velum, and proceeded to do the final line art. Once scanned in,  I added a bit of shading to finish it out in Photoshop and delivered the JPG.

I will be posting a few additional sketches in the next weeks to show the other design areas I covered, all in about 3.75-4.00 Hrs per design delivered to Blingd for production to build it out.

You can view the prior posts below:
PART I
PART II

The Music Video is here.


Posted by 3Dconceptualdesigner at 4:12 PM