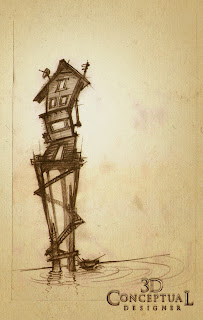 I've been on these little cabins and swamp houses lately, so I did the super high,  tall and thin proportioned concept last night. I tilted each level of the house to the emulate the back and fourth found in the human torso body mass and hips, this gave the home some 'life'. A pain to take up the groceries huh! 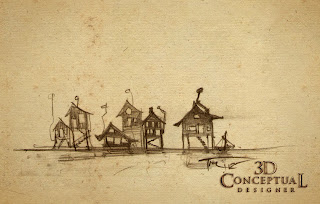 As my Eastern European friend would say, a little "willage"[village]. This was to be the background behind the above sketch if I do this in 3D. 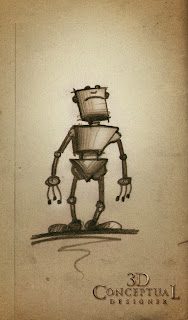 Another mini [ 1" tall] robot sketch. I try to capture a felling in each little sketch I do. The goal is to get a personality with the least amount of work first. Details can always be added to any design, but the base comp must work. 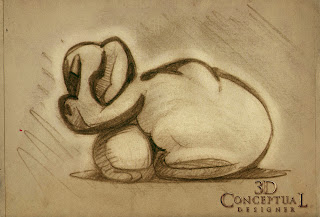 I was explaining 'gelatinous' to my 6 year old referring to the character "Bob' in Monsters vs. Aliens, so later than night, I did a gelatinous armless puppy with a ball as seen here, ...yea I know...

Personal Project
Napkin Sketching and Doodles Part XVIII[18th]
In this eighteenth installment of the Napkin Sketches, Drawings, and Doodles I do when I have a pen in hand, I have put up some more 2012 sketches that I have done this month.

These doodles are quick ideas usually 5-10 minutes from concept to final. I learned at A.C.C.D. in Viss-Com 7, my senior year to do these quick 2 minute, 3 minute and 5 minute sketch drills.

We would do these in Doug Halberts 7th term class for hours on end, and little did I know how valuable the exercise would be.

Don't get me wrong, I love a good full day detailed blue line sketch as evidenced on my blog here, but these little ones are so valuable to do FAST, it really sharpens your ability to make a fast design choice.