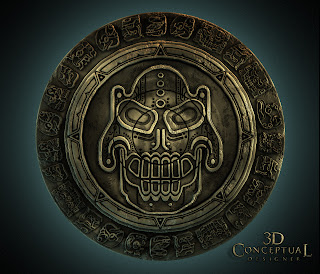 The final main Mayan Calender Icon I created in 3D for the Key Art presentations, as well as a MGFX piece is here above. The outer ring was taken directly from a Mayan calender stone we found while doing research. 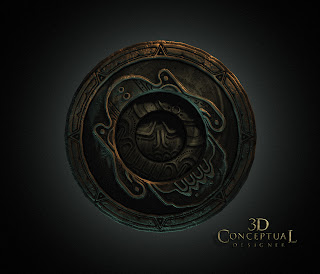 Here is the above object with the outer ring deleted. It is also in an animation sequence with the four separate rings both turning and moving back into the depth of the 3D space. 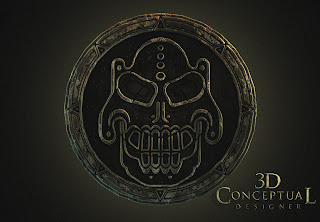 This was one animated reveal we did with the light limited to the front face of the icon so the skull was easy to read and fade to black with just an edge lit circle ending the piece. 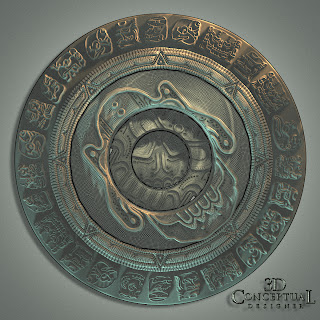 Here is the geometry for the main logo, you will not that the outer ting required a bunch of polys to displace it properly, and the object was to export to two other platforms so I could not use a 'live' displace modifier, in needed to be baked in.[ 2 million faces!] 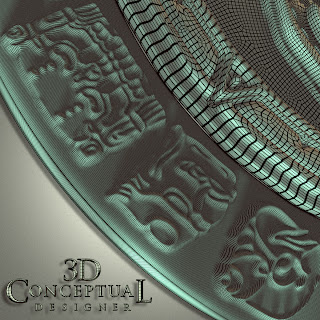 A close up on that outer ring show the level of detail in the model I built. 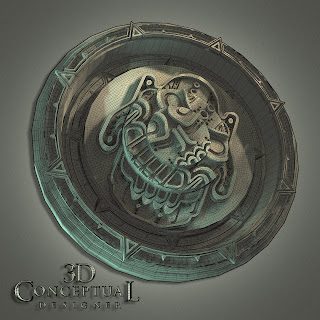 With the smooth tuned-OFF,  you can see the base mesh in quads I built for Indian Jones IV. 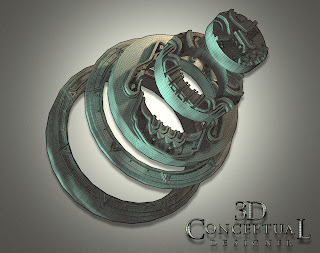 A Quad view of the Indian Jone four Mayan Calender model, with sub-division OFF[ turbo-smooth], and the parts exploded out to view them separately.
Project Review

This is third posting for the Key Art Design work I did for Indiana Jones four, The Kingdom of the Lost Skull, today I look closer at the Mayan Calender based Icon I built for the pitches.
This work was done for Joseph Stamper in the Design Print Division at The Cimarron Group. We wanted to create an Icon using a skull in both crystal[ as seen here], as well as include the Mayan Calender , a stone circle with the rings as separate carvings, so the icon could animate in and out of phase to show of , or 'reveal' the skull.

What is wonderful in 3D is the ability to light based on  a virtual distance from camera, or view, so I can set the light to just hit the face of the design, thus the skull is revealed via a lighting trick in Motion Graphics.

I created this Icon for Print, Living One Sheets, as well as AV and WEB, using a fully animated sequence. It was built all quads using the Power Boolean function from n-Power built into 3DSmax, and was textured in procedural textures using Simbiont and the Dark Tree programs.