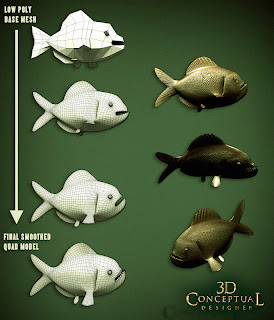 Here is the base fish I built out for Piranha 3D, and in a few Hrs it was ready to render. 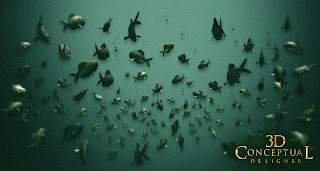 The first shot I did of Virtual Piranha was a swarming shot no specific direction. 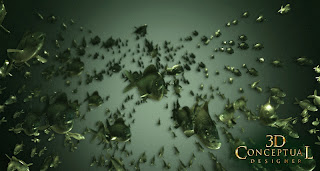 This shot the Piranha came at camera 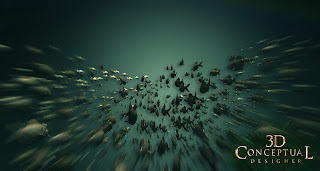 A fast swim shot going to a single point in a straight on perspective for Piranha 3D. 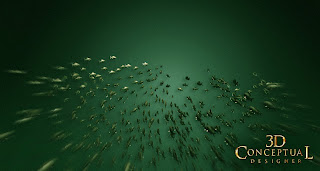 Here is the same basic shot pulled back with 4X the fish in the shot. 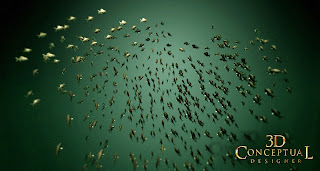 I dropped the camera on that last shot to look up to the swimming hotty added into the comp in this last one from back in 2009 for the first remake of Piranha.


In this second posting for my contributions to the Key Art for the Remake of Piranha 3D back in 2009, I cover the fish themselves I did for the project.

After seeing the Posters for the next one, Piranha 3DD, I see that there is nothing new under the sun, as this direction was used in the 70's and again in 2009[ as seen above], and again now in 2012.

At the time I started, we did not have good scrap for the fish so I built a modified regular Piranha to adjust it to use for the comps presented. The fish itself, was a fast mock up in 3D and I did a few variations with bends and turns so I had about 5 to 6 different fish to scatter about. I did get the shot from the film but we did not update the renders due to budgeting.

Most of these were done for Art Director Brain Lauzon, and he provided some sketches for base direction as he had a series of ideas that had the fish going up, back, and right at us.


This is a perfect fit for 3D Illustration, as I know many an Art Director cutting out fish and doing a 200 layer PSD comp to achieve this with photo-scrap, whereas in 3D I merely move the camera lights and pose the fish to get exactly what is needed in a single render.

You can review my first set of 3D logos in the first Posting here.

Posted by 3Dconceptualdesigner at 12:45 PM