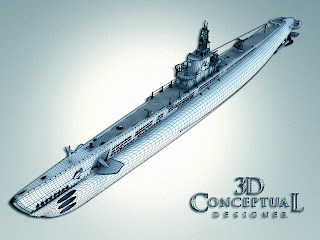 An overview shot of the full submarine I built for the final Key Art for Below. 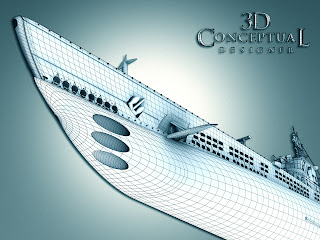 A close up detailing the nose of the submarine that was in many a comp idea prominent with the torpedo bays open for business. 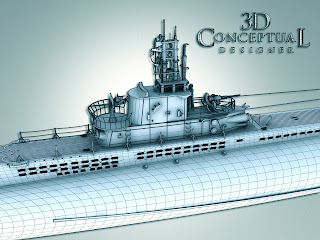 I cut the holes through the body mesh using the then standard Boolean tools, now I would quad model this out for full resolution needs and use the Pro-Boolean as needed with a quad mesh option ON. 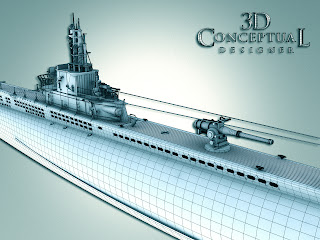 The 50mm was mounted on the back in this configuration for the film, though many had it up front. 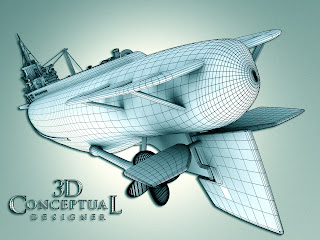 A tail shot showing the props and rudder assembly as built for this Baldo Class WWII Sub. 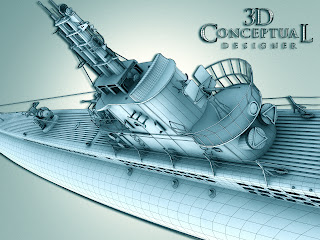 Anti-aircraft gun with should cups was mounted and ready for action on this virtual submarine.


This is my second posting covering the 3D illustration work that I did that was used in the final Key Art for the film Below, back in 2002, a decade back now. Today my posting shows the geometric makeup of the 3D models that I built back then.

This Sub was built in about 10 hours, and in advertising that is about all the time they have to spare. It is always a challenge to build a complicated prop such as this in just over a day, but I was up for the task, though I did not quad model this, as I was still doing fast high-rez modeling to get the job in on time, so back then that was definitely a limitation I have worked to move away from.

However I have always been a stickler for details and with this Baldo class US WWII submarine, this was how I approached the job, so I included deck cleats molded board and battens and all wires and some rivets as well. Enough to catch a highlight and produce a nice shadow.

You can view PART I from a few years back here.

Posted by 3Dconceptualdesigner at 1:30 PM