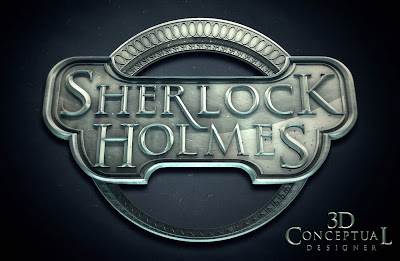 The first Logo I designed for Sherlock Holmes was the most simple of the three I did. This was done in a cool metal used on the X-Men 3 poster I built.

Here was the warm version done with brass aged bronze and amber art glass. I put the center of Big Ben that I had constructed prior in the center of the logo holding device and lit the glass up there too.

This last version had both the warm glass, though not lit up, and some cool lower lighting with a bit of blue/green in it to match the look of the the film as it was treated with some cooled tones in aging the look so we followed suit with the poster artwork.

Here is the model I built, using filigree from the Venetian project and a few sub-D parts including the type and main holding device. 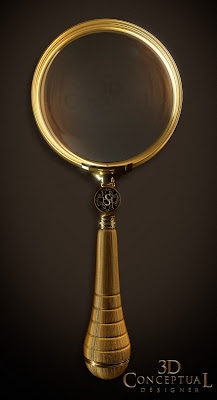 A monogrammed Magnifying Glass I designed for the Poster Ideas we pitched for Sherlock Holmes in 2008. 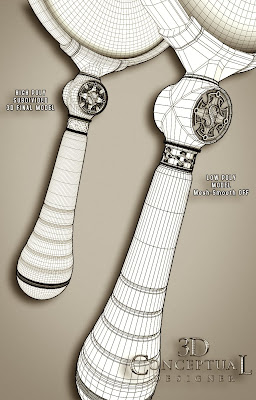 Here you can see the Low Poly, and the High Poly smoothed model I built for the comp.

I would have loved to have had a few weeks to work on this property as it was an intriguing concept and beautiful production design, so to help develop a period piece logo I was amped. I was given a single day, typical to about 80% of my theatrical work pace. While at The Cimarron Group in Hollywood back in 2008, I was given the task of developing a few logos for the soon to be released Guy Richie film Sherlock Holmes.

I had become very familiar with Art Nouveau back in the 90's while working on the restaurant design in Beverly Hills for Cafe Morpheus, so I learned all about Alphonse Mucha and his wonderful and amazing line work from his posters for that era. I found a small filigree element in a few concepts that I used as the starting point to build out the medallion you see above in the logos. I modified the Single Point Beveled text I had built for Valkyrie out of Trajen and added some Nouveau flair by moving the center up and the tails down.

We also had a huge close up of Robert Downey Jr's eye, and they needed a magnifying glass to overlay onto the comp so I created that prop design above, with some detailed 3D filigree as well.

The filigree actually was a re-use of some architectural parts I built at Cimarron for The Venetian Casino a year or so prior. Enjoy the posting.

Posted by 3Dconceptualdesigner at 9:58 AM