The client provided the Logo for the film up front so we basically developed a few looks in 2D and 3D using the font and colors we were directed with as seen in the beveled font I made. 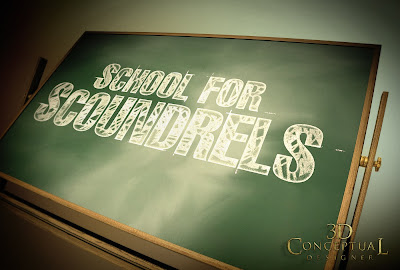 This was a fun little concept of having the chalkboard have film footage on the back and it flips around to reveal the title in chalk on it[ then erased off]... 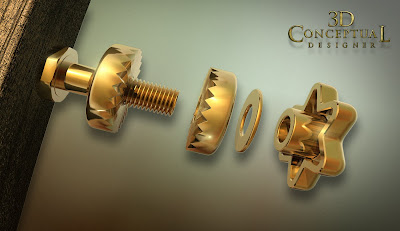 Here is a close up of the mechanism I built for the chalkboard. Though a simple scene I go to into detail on any part that may be used in a close up shot as this was boarded to have. All parts were built as BREP/NURBS as this was prior to my Quad Sub-D development, and this had a super fast turn around time so I quickly built this out. 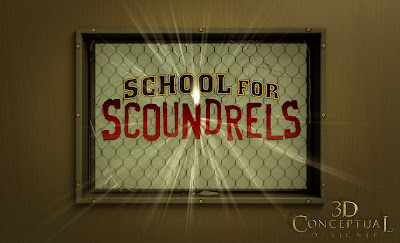 I designed and conceptualized out an Old 70's Door to a classroom with faux wood and the steel framed wire reinforced window that has a bullet hole in it. Lots of details for a simple little shot, but way too much fun to do. 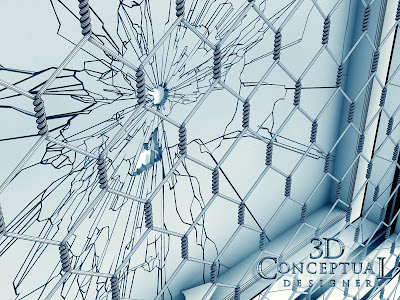 A close up showing the model details for the chicken wire inside the glass with the hand drawn then modeled bullet hole in the window. 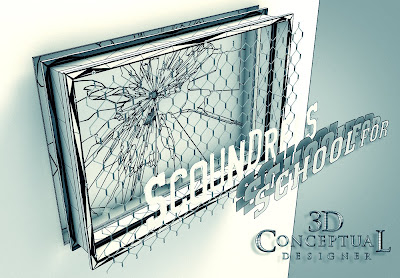 An exploded view of the parts involved with the swinging door animation I did for Motion Graphics. 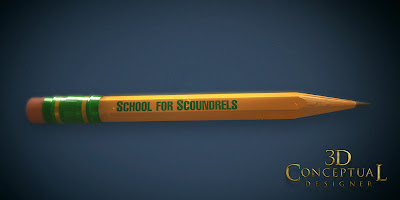 Nothing says School like a Number 2 pencil, and I had built one in the past here and here, so I remade this one with the logo cut into the yellow. We discussed having the pencil break in half and shatter into thousands of particles, but the basic concept was scrapped early on.

Todd Phillips directed this fun film, School for Scoundrels and I had the pleasure of helping develop some Logos for the Motion Graphic work I did while running my little department at The Cimarron Group in Hollywood, CA back in 06'.

For School for Scoundrels, I came up with a few Logos that were basic fonts, and built as Single Point Bevels as seen above, but the majority were Logos built on objects or from objects themselves. I built a Pencil with the Logo in it, and a Old School door with the name on it too, and even a chalk board with the title, scribbled on the board as an animation.

Above I also am showing some of the close up's of the various parts I built for these images. I go into great detail with the scenes as we usually fly the camera through the scenes, so the glass in the door had cracks and wire modeled into it for that purpose.

Posted by 3Dconceptualdesigner at 10:08 AM