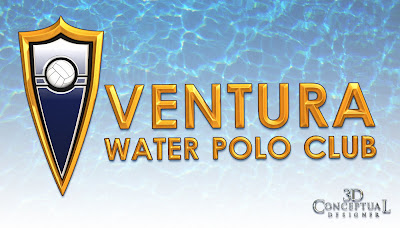 The first design was close to what was chosen by the client I did this with a Single Point beveled type with a gold crest with a wave Icon, as well as the ball in to logo.

For this alternate design for the 3D Logo for The Ventura Water Polo Club, the crest was simplified with type added to see if that worked. 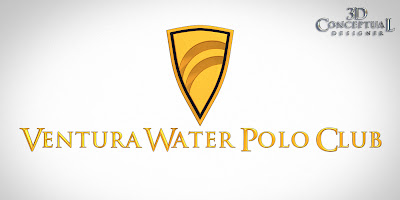 Here we experimented with Trajan Pro , in which I had built out in 3D for Valkyrie, as that is the 'Font-Du-Jur' used in film and they wanted to see a version with a nice serifed font in gold.

Back to the San Serifed font with a little playful with the tails and an adjusted crest.

Here is the final "Big-V" logo done for merchandise and the website. This was the final in 2009, though the colors have been updated now for 2011.

Here is the Quad model for the main font shown in this render.

Back when I was running the in-house 3D Design and Animation department at The Cimarron Group, in Hollywood, CA. I brought in the Ventura Water Polo Club, as a new 3D client for a small Logo design project done in 3D and translated into bit mapped and vector artwork for the team, the website, and all merchandising for the Water Polo team.

You will see some of the process I had in designing this logo above in the variations I did, and I ended up with a nice crest with a water polo ball as part of the Icon design, as well as doing a full type treatment and a "Big V Icon" for hats etc.

A fun project that just recently came back for a bit of color adjustments to a new flavor, you can go check it out online here, enjoy the posting. Also my great tech friend Richard Barerra, built this site along with mine.

Posted by 3Dconceptualdesigner at 1:45 PM