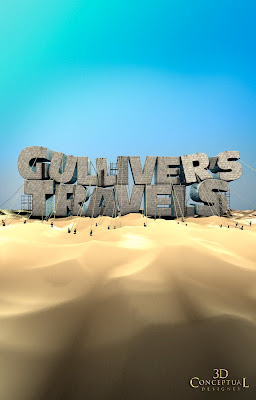 Here is the first Logo I did for Gulliver's Travels in 2010, it was playing off the Teaser Poster with Jack Black[ Gulliver] tied down on the sandy beach, this was a One Sheet proportioned 3D Logo Illustration.

Here is the same concept modified as a 30-sheet billboard single line of text with the same sand and straps from the above conceptual design I did. 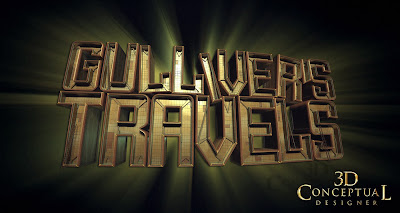 This was a constructed logo using various plates and parts which was based on the production design in the film where all the "BIG" stuff like the chair was made from thousands of little parts so the logo had a lot of breaking up into sub-parts for the renders. This one also used a bit of fish-eye curve in the lens. 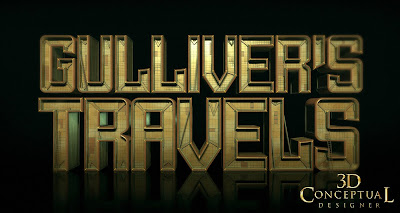 Here is a similar version with some light modifications done as a basic front view at camera shot. 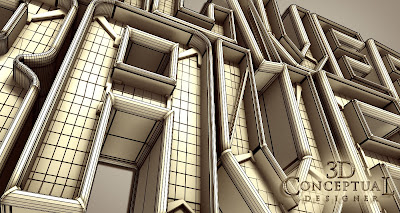 A close-up of the geometry reveals the construction of the fill squares along with the corned retails ladders etc in the design, all as second read elements. 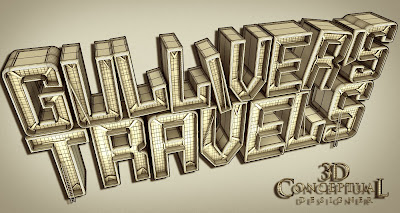 Here is the overall view of the geometry I designed for Peter Stark for the concepts presented.

I started my Theatrical Advertising career at BLT back in 2001, so to be able to return as a freelancer years later to help out was a real pleasure for me. They are in great hands as my colleague from Art Center, the talented Roddy Navvaro, took over the department when I left and remains there with a good sized staff for the continued 3D needs they have.

I was called in for a bit of overflow 3D work on Gulliver's Travels, and this is the first of two parts on the job that I did for Creative Director Peter Stark.

The first part I am covering today, are a few fun 3D logos for the poster concepts, and though it did not finish, and make it to the finals, it was a fun design process, and a good finished comp presentation none the less.

My First executed concept was to make all the letters in 3D and move them around a bit like blocks of ancient ruins, all the while being held down with the iconic ropes, as we see thrown over Gulliver's own body in the posters and the books.

I also did a logo made from various plates of brass, bronze, and copper to form these letters that also would have the Liliputian's on ladders[ see image], and inside cleaning and adjusting the text for the comp. The scale of having these miniature folks all over the logo was consistent with both designs.

Look for part II coming soon, where I cover the 3D Virtual Sets I built of the Castle Itself, so Jack Black could be comped into the various shots with the building at the right angle and lighting to match up for each concept from the Creative Director.