Behind the Art: 3D Toon Style Ink and Paint and Lighting Look Tests

Here is a stark toon image showing the limit of a direct light model on the Left. The bounce light is what brings the scene to life on the right. This was a very early image I did with Final Render Stage-0 back in 2001. 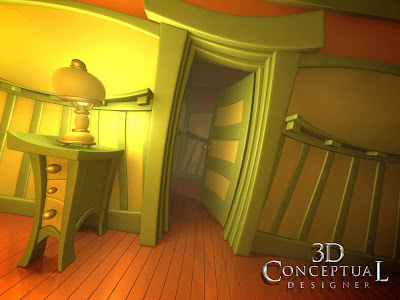 I took the same toon scene I designed and built a decade ago into the current version of FinalRender 3SE, and rendered out this example. I also added a turbo-smooth to a set of parts to round them out a bit for this experiment, though the scene was not a quad sub-b model the parts worked since I gave them all many segments to bend smoothly for that toon look of 'no straight edges'. 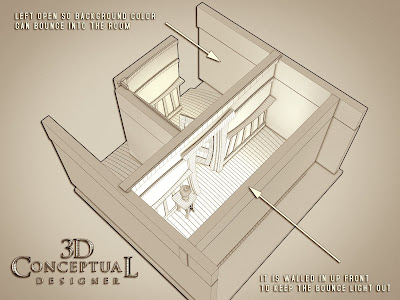 This geometry rendered view shows that I left a gap in the back room to leak light and color since the GI[ Global Illumination] takes the sky outside into consideration. I also blocked off the inner room with a wall to give it that darkness with almost all indirect light. 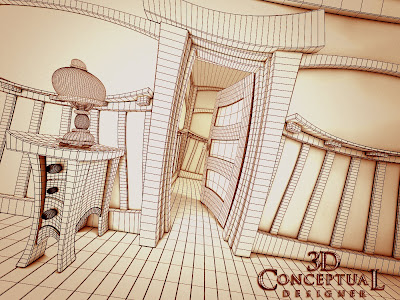 This Camera view shows the segmenting I performed on the parts to get them to bend without too much faceting on the curves. Also I latter learned that the GI renderers like even little polygons, and do not like long thin ones, so segmentation is the norm for me. 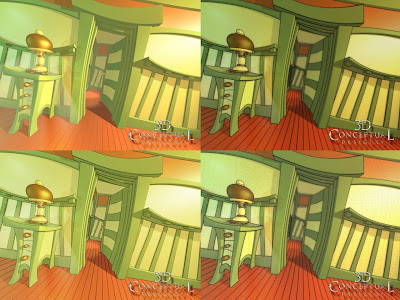 Here is an image from a decade ago using a toon shader plug in to achieve some various looks in the little toon scene I made.

Back in 2001 Global Illumination 3D Rendering was just starting to come out 'en mas, and Final Render for 3DS max had just come out. I had built out a little 3D set to test out some ink and paint looks and when the indirect lighting ability was added I jumped on it and was an early adopter, and immediately began experimentation with various scenes I had built to see the looks we could get.

Above you can see the basic structure of the toon styled room I designed and made. the fun shapes and exaggerated bends to soften up the hard edges to a toon world. I then experimented with a few looks with too shading with an ink and paint outline and some various fills including some textured passes.

I keep the scene as a base for various experiments and renderers to test to the speed etc. One way to keep your skills evolving is to use them constantly. Open up a scene and play around even more, keep going. Every hour in 3D you will learn something and have a good take away for the next round. Enjoy folks.

Posted by 3Dconceptualdesigner at 10:13 AM