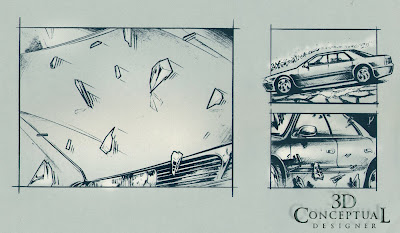 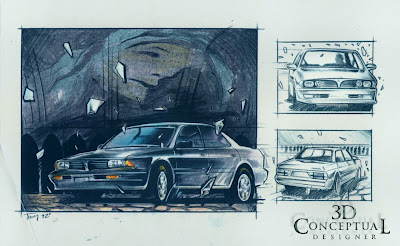 Some style frames for the Mitsubishi 1993 Diamante done in 1992 for Dreamquest. 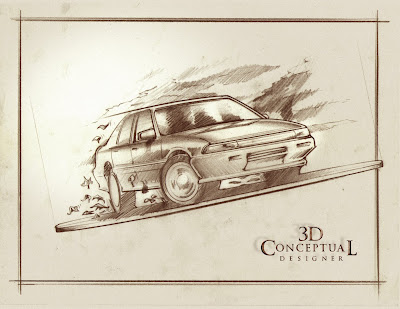 A Mitsubishi ripping up the leaves on the ground
[ that turned to gems via some Dreamquest VFX]. 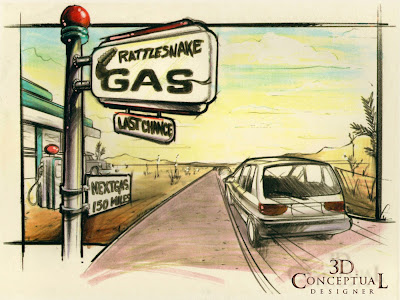 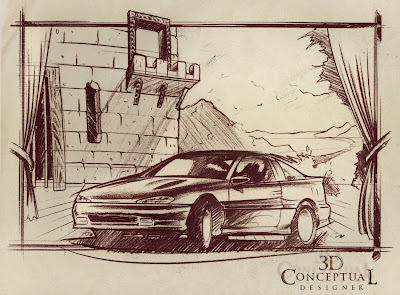 A Style frame I made from the storyboards of an Eagle Talon at a castle. 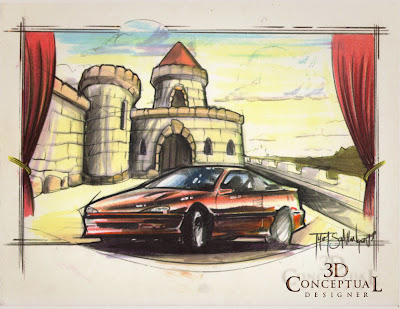 A Full Color Marker comp style frame for the Talon.

I did full freelance my first year after graduation from Art Center in Pasadena California back in 1992. I had a regular few companies I did set design for, and Dreamquest was a huge VFX shop in town out in Simi Valley that I would do regular jobs for.

Above you see examples showing the product from back to back jobs I did, simultaneous for automotive commercials with a lot of Visual Effects for Dreamquest. A few Marker Comps, and line drawings.

The Mitsubishi spot was for a Japan only model the Emarude[ emerald] and the Diamante[ diamond] competing in a slow dance duel with shards of the gems floating around the cars. A fun conceptual piece with a lot of VFX.

The Chrysler Corp spot was for the Jeep Eagle brand for two cars with some stylizes sets as shown. Most jobs were , in and out 6-8 hrs. and I was done, and this was no exception. The Set Design world was a fast a furn around as advertising seems to have.

Dreamquest eventually spun off DQ Films, the TV division of the VFX work, and I have some added postings here and here on storyboards and set designs I did for them continuing to 1997.
Cheers, THOM
Posted by 3Dconceptualdesigner at 9:30 AM