Here is a B.I.O.T. Dressed up as The Phantom from the show. 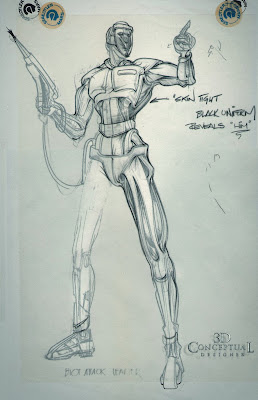 All our characters were gaunt and thin, and that is what inspired me to dress the B.I.O.T.'s in skin tight outfits, to emulate a "balloon stretched over a skeleton feel" that all the characters had in the show. 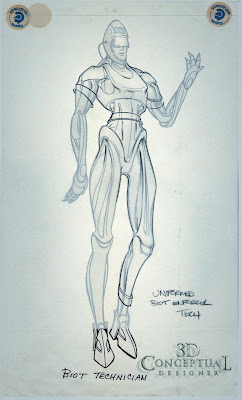 An early variation on a non-final B.I.O.T. robot design. 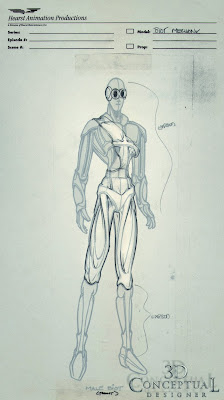 Here is the production Mechanic B.I.O.T. as a Male robot.

A B.I.O.T design for a Samurai B.I.O.T. I did a Geisha Girl B.I.O.T for the same episode where Maxwell visits Japan.

In this, my 75th post on the Hearst Animation Productions hit, The Phantom 2040, a television animated show from 1995. I have near 500 images scanned and posted for your enjoyment. Today I have put up a few overlay design sketches for the various B.I.O.T's [ robots] from the series that I developed back in the nineties for the show production at Hearst Animation Productions.

B.I.O.T's were all over this show. I had Male, Female, Old, new and about every variation you could imagine even a Horse and Wallaby. Above you see a few overlay designs I did for specific BIOT's including a Phantom 2040 B.I.O.T, and a Male and Female Mechanic B.I.O.T., in an orange jump-suit.

Sometimes I only had a few minutes to modify a character for a show and a quick tracing paper overlay would suffice for the design and it would go to inking for the finals.

Cheers, THOM
Posted by 3Dconceptualdesigner at 10:08 AM