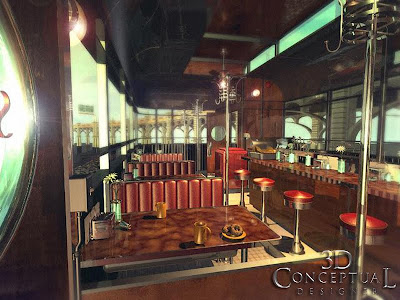 Main Interior establishing shot of the Launch City Diner I designed and built from back in 1999. 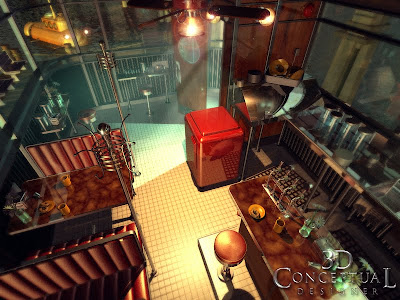 A birds-eye shot down inside the diner[ notice the Pink Floyd Pig reflecting in the Coke(R) Icebox, I was "asked" to remove it! 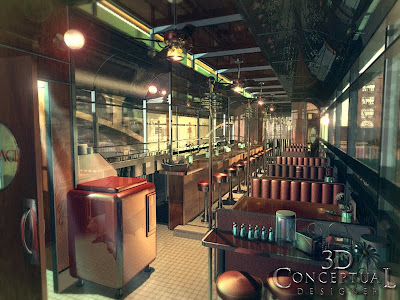 A reverse shot inside the Diner looking back forward. 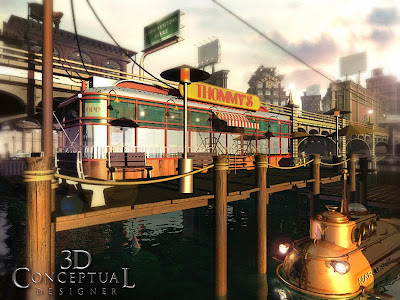 An exterior establishing shot showing the diner with the dock and the mini submarine in the foreground with the full Launch City as the backdrop. 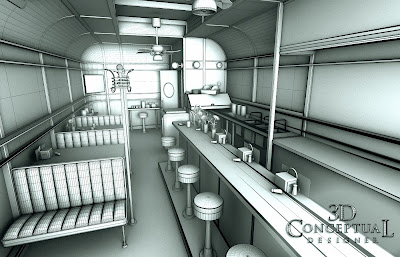 In this fourth post on LAUNCH city, I was hired 12 years ago when things were booming in the "Dot-Com" boost in the late 90's, and I became a part of the team latter on in the production cycle when they wanted a full redesign of the Launch Virtual City for the web as well as for the CD_zine that they published monthly, as I was coming from Walt Disney Imagineering, and they wanted to do this revision with a theme park feel.

I created a dozen or more locations in this "virtual city" as we wanted to sell virtual real estate to clients so they would have a destination in Launch City for their own content. Adding in an Iconic American Diner, seems very logical for the nostalgic music segment that is associated with Car Hops and Diners like Elvis and any 50's early Rock and Roll Icon.

I designed and built this scene is 8 hours as I only had that amount afforded for each unsold space, so I had to hustle in my work for this to come out well enough to use. The scene is located in the center of the city right under the main bridge that takes us into Launch City. It is an interior and exterior set with a dock and patio outside with a v full view of the city behind it.
To view PART I on Launch City you can go here.