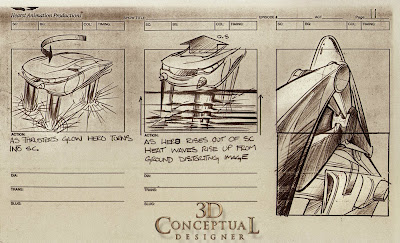 ..We continue with "Hero" lifting off in Hyperflight mode as Graft enters the scene in Combat mode. 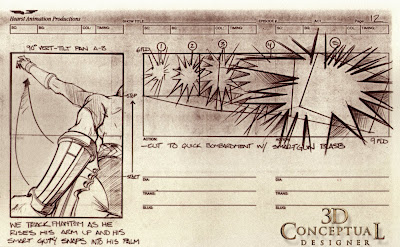 The Phantom raised s his arm and the "Smartgun" he packs flips to his hand and he fires a burst of shots... 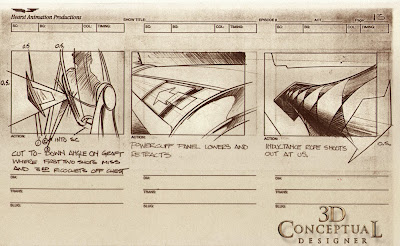 We are now introduced to The Phantoms Power-Rope from his Power Cuffs he wears. 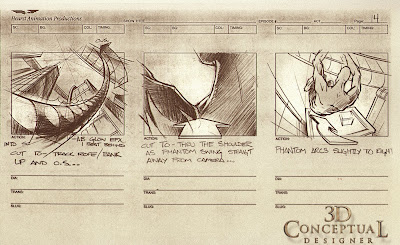 The Phantom 2040, then shoots the rope high into the city and swings into frame... 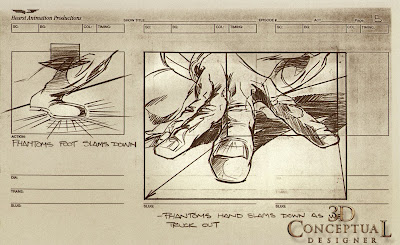 We cut to a close shot of a roof as a foot lands, we pull back to reveal a huge hand of The Phantom... TBC...

In this 62nd post on "The Phantom 2040" television Animation Series I have put up the third post of five for the storyboards I did for the opening title sequence for The Phantom 2040.

We finish watching "Hero", Kit Walker, a.k.a. The Phantom 2040's, Mustang change and fly up into the air. We also see some of the gadgets found in the Phantoms arsenal, like his Power cuffs , Power-Rope, and his dual Smart Guns in this sequence that replace the 1911's he originally packed as a character in the 40's.

I found more pages last night for the boards, so I will scan them in and post the final two parts [ five total] in the next week.

You may view the prior post for pages 1-5 here.

Cheers, THOM
Posted by 3Dconceptualdesigner at 10:02 AM