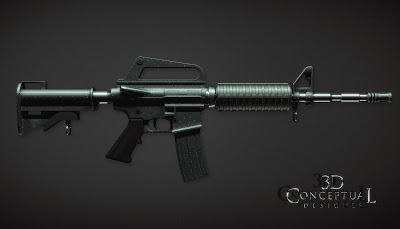 The SWAT M-4 firearm I built for the Motion Graphics Teaser Trailer back in 2003.

We were going to go inside the gun, so I built it hollow which takes double the time, here is an exploded view showing the components built.

The bullets and all internals were built.

This render shows the geometry and topology of the 3D Model I built.

An overhead view of the Model I built for Matt Hartle to animate for MGFX.


It this second posting for the work I did for the ad campaigns for the release of S.W.A.T. back in 2003 for the Motion Graphics teaser that our in house Animation Director Matt Hartle set up.

I built the models in 3DSmax and exported them out to him via OBJ[ Pre FBX days]. It should be noted that these are not quad models, as I was still developing the modeling technique to be able to do that fast enough for the turn around times usually associated with advertising, so I did a fast model of this one.

This model had a complex camera move go around it in the original concept, with assembly and disassemble done, so I built all parts two sided with enough internals to fire a bullet out of the 3D representation as a virtual M-4.

You can view the render in glass here from a prior posting.

Cheers, THOM
Posted by 3Dconceptualdesigner at 11:04 AM