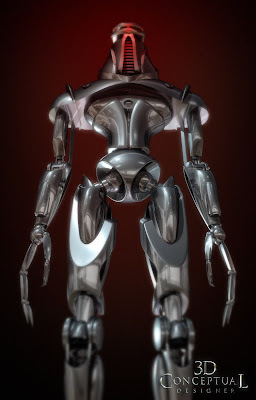 The 3D Illustration of the new Cylon for Battlestar Galactica 2003 I made from the concept sketch. 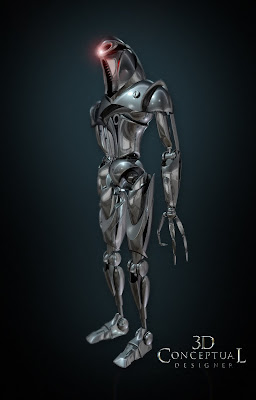 An alternate angle for comp ideas used at BLT and Associates for the pitch. 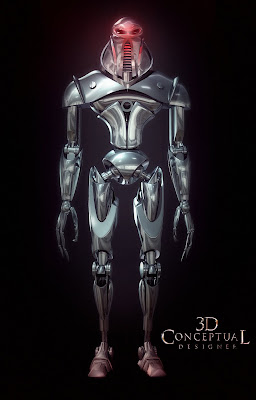 Here is a version with clean new metal. 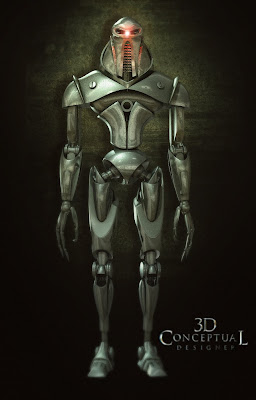 Here is an alternate version of a Cylon with distressed metal. 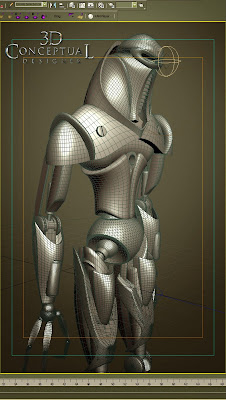 A screen capture shows the geometry, as I used N-powers Pro Nurbs tools for many parts. 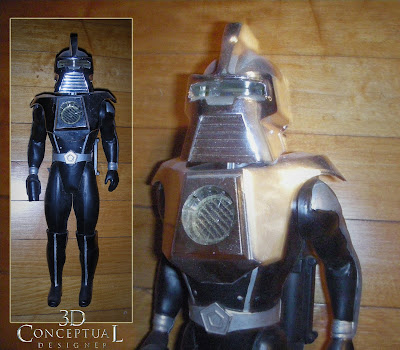 My Original 1980's toy Cylon for the original series, as it helps to be a fan when you build 3D Illustrations.

Back in 2003 when I was still in-house at the Theatrical Advertising giant, BLT and Associates in Hollywood CA. I got a really fun one day project to work on for the new re-boot of the 80's TV series Battlestar Galactica. I am from that generation, and still have my Cylon toys, so I was amped.

When I was assigned this there were no Cylons built in CG yet, so we had no reference of the final product, all I was given was a single front view blue-line sketch to build off of. I had to create the Cylon as a photo real asset to sell the ideas from just that so I went to work as I only had one day to do this job, which is typical in advertising with fast turn arounds.

What you see above is the product of a one 8 hr day build+texture+render for various comp ideas for the team working this campaign.
Cheers, THOM
Posted by 3Dconceptualdesigner at 12:28 PM