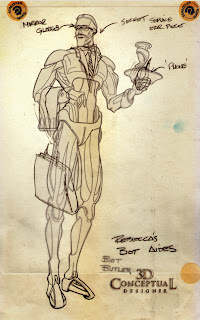 Rebecca Madison the head of the evil Maximum Inc. had many bodyguard B.I.O.T's here is one design I did. 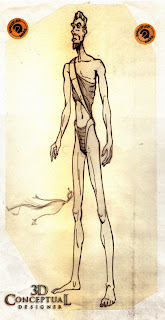 Sean One lived in space and was about 12 feet tall,and this was one of his alternate outfits, like a tight speedo with a bit of a wrap over the shoulder. The little sketch to the side of his knee is how he floats in the show .

A Tracker character with some modifications done to the head, hat, belt, gun, and shoe details. All sketch overlays are 8.5 x 14 xerox with tracing OL's.

A enforcer with a RIOT shield from the show.


For my Thursday 2D post this week, I have some more character design overlays that I did while at Hearst Animation in Studio City California, back in the 90's working on the TV animated series, The Phantom twenty forty.

When I was hired on, the team had started some added characters but without an Art Director or theme for the series it required adjustments to the details to fit into the Art Nouveau look I was to get established.

I made sure that the belts and shoes would wrap around the person or B.I.O.T.[ Biological Robots] to mirror the Ghostwood vines constantly poking into the city[ like the Phantom himself!].