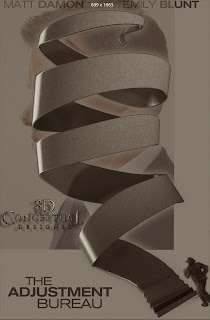 The first pass at the Mobius strip inside Matt Damons head, and on this first pass I aligned it close to the 2D sketch. 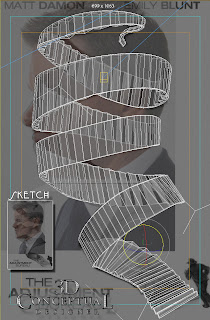 Here is a shot showing the basic set up and distortion to the strip when viewed from the side. Whenever you match 2D to 3D exactly since 2D is always a fake, and usually discounts real perspective rules, I need to bent the 3D world to conform back to the 2D. 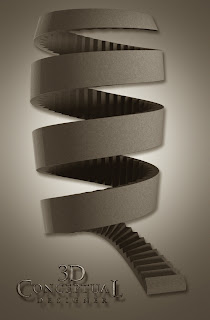 The final delivery for the Mobius Strip was this much more even and symmetrical version that was used. 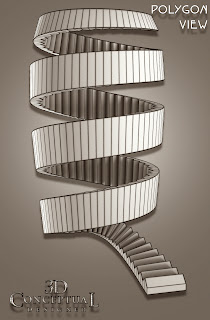 I built the model flat and used a twist modifier to create the base object. 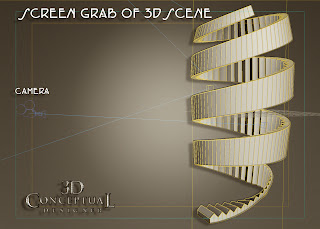 This screen grab show the camera and simple scene with the Final Render Rectangular Box Light to the side for the reflection. 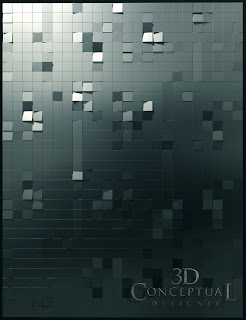 The final render I delivered to Cimarron of the tile wall in little metal plates. 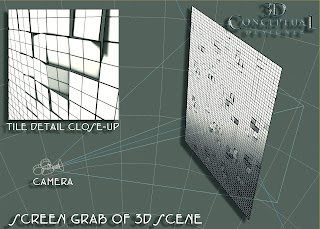 A Polygon view of the tiles wall shot, basic built with chamfer cylinders


This was my first project for The Cimarron Group in Hollywood California post my departure as a full time employee for six years from 2003 to back in October of 2009.

I was originally hired to establish a small 3D Department to deliver "The Goods" to the various departments at Cimarron covering, Theatrical Print, Theatrical AV, Home Entertainment, DVD and Blue Ray Packaging etc, and the Corporate Advertising Division, with clients like Universal Studios Hollywood, Mitsubishi, Lotus Automotive Group, Coke, and Countrywide, etc., and the work I did for these divisions back then helped establish what I do for my clients to this day, so I was able to secure a bit more work after I left.

This project was a fun one,and I got to work with the very talented Joseph Stamper, a great Art Director again on this one, with a few fun concepts to be done in 3D for the posters he designed and presented.

The first 3D Illustration I built was the Mobius Strip that needed to wind around inside the photo of Matt Damons head so they could superimpose some footage from the film on the stairway in his head. I refined and delivered this first design above. It required a rework, so I simplified it down and delivered the final for presentation.

Next, I also did a quick take on following the look of some of the trailers with the flipping tiles look so I did a sheet that could be used on a one sheet with photography so I rendered out a few shots at 5000 pixels wide for that use as well.

A quick one day gig, and fun.

Posted by 3Dconceptualdesigner at 2:50 PM