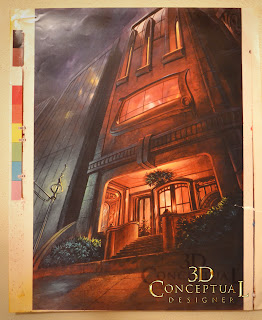 Here is a main establishing shot painted by Jesse M. Santos while under my Art Direction for the Series The Phantom 2040. 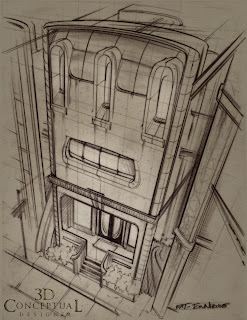 I designed the brownstone , and had Jesse do a worms eye angle up on the home for the key layout artwork done for The Phantom 2040. 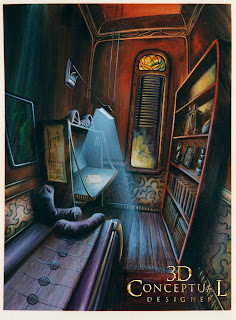 A Color Background Layout for Animation done for The Phantom 2040's main character Kit Walker, this was his dorm room. 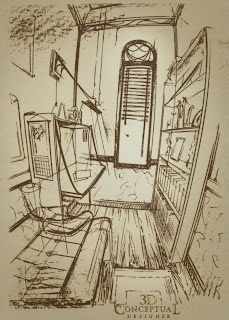 Here is the layout that I did for the shot. I also even did freelance over the weekends on the project ant this background was faxed over so all I had was this copy[ a re-post] 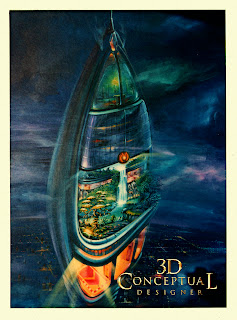 The tip of the Mile High Maximum Inc in Metropia Painted by Jesse M. Santos as well. 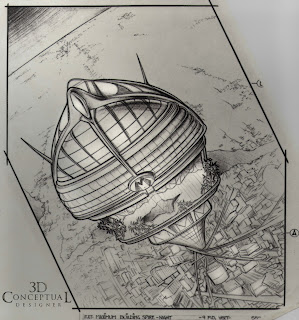 Here is the design sketch I did that was the basis for the variation colored above. 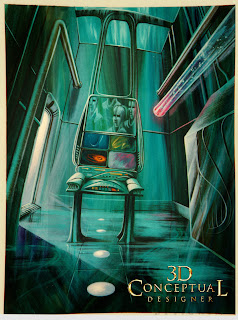 An interior of Security at Maximum Inc. due to the green colors this was inside the headquarters.
I am still looking for the layout to this one, and I'm sure I saw it over the years...


For my Tuesday 2D post this week, I have scanned a few more of the photos I recently found showing the painted background layouts that I Art Directed for the TV Animated Adventures of The Phantom 2040 back in the middle of the nineties.

I designed a majority of the locations for the series based in , and around the city of Metropia which had a Ghost Jungle hidden underneath the huge futuristic city where the Phantoms Lair resided.
The city had many layers similar to what was seen in Demolition Man, with the lower ground levels being where the poorer folks lived, while Maximum Inc. rose to a one mile height above the city, and these layouts above show four more locations along with my re-posted sketches for the various sites.

I had a good team of painters in house, as well as a great team in the South of France who seem to be able to paint right from birth, so a few color keys and they matched the palette wonderfully!