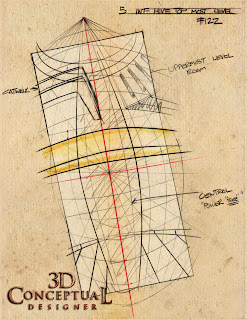 Cyberville was a B.I.O.T. based city in the later episodes of The Phantom 2040, and this is a layout blocking I did for the team to follow. 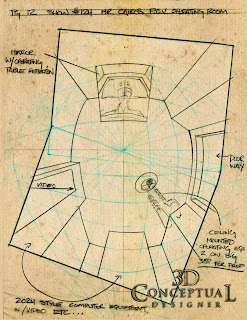 This was a fun shot to design, Mr Cairo was on an operating table looking up at the ceiling so I put some strong fish-eye on the shot along with a tilt-rotate pan of sorts as he looks up to his reflection. 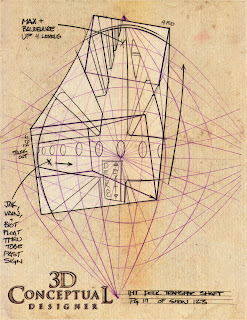 For this blocking I did this for the layout and the storyboard crews to help set up our truck in pan shot here. 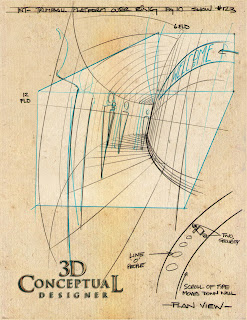 A shot of the curved walls inside the space station where Sean One lived with a scaled blocking for the characters.


So today for my Thursday 2D post, I have here my 111th post covering the Conceptual Design and Art Direction work that I did for the TV animated series, The Phantom 2040 from in the early ninety's, and I am reviewing some episode Direction Scene Blocking that I did for the show.

As Art Director on the show, I blocked out in simple grid format a whole bunch of shots to assist the multiple teams with staging in fish-eye. Getting folks who have only drawn straight edge perspective to move over to curves was a difficult one, as most students I meet do not understand the concepts behind why we see in perspective in the first place[ parallel lines projected onto a sphere will converge]so they had difficulty with the fish eye, let alone just an accurate straight edged perspective, so I did these grids to help them.

They were all small sketches, so as to fit on the storyboards themselves, and we taped these originals to a board pages to give the animators a clear understanding of some shots along with the various other reference.

Trained in space planning at both CCS, and ACCD, this was a skill I never thought would be used in TV animation, but it was a great help in staging these shots.