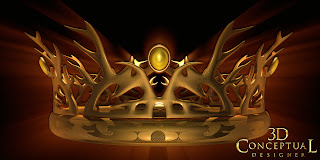 Here is the front shot here render of the 3D Crown I built out for Game of Thrones Season Two last year. 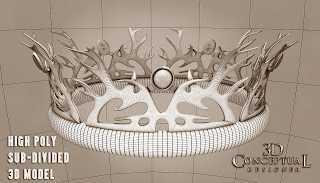 This is a render of the smoothed mesh I built out all sub-division with a Turbo-Smooth applied. 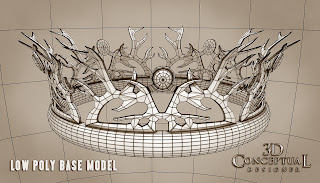 Here is the base model with all subdivision removed to show the simple base model I created. 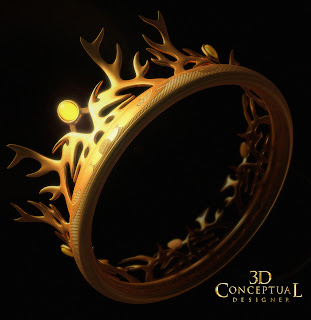 An angle similar to what finished with Richards Crown that I did here for the finish. 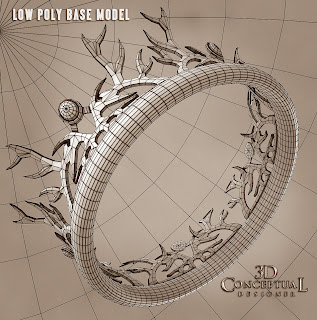 The low resolution base mesh.[ Note the band details are not modeled into the band] 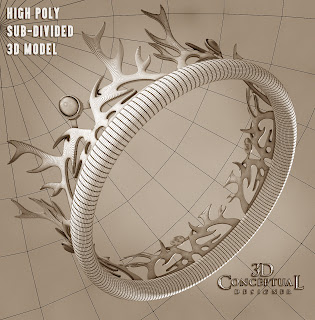 Here is the smoothed model ready to render with the sub division added back in. 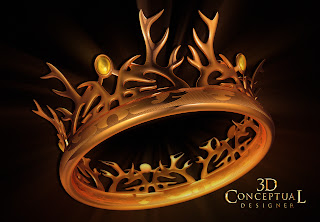 Here is another angle showing the reflection on the band , as I used the map for the bump channel, as well as the specular and glossiness channels.

Here is the 3D band details that I modeled out in 3D as well, and created a Z-Depth map to use as my bump specular and glossiness channels.


I created the main crown[ King Richards ] for the advertising for the Season two of Game of Thrones in my prior post on Game of Thrones here, so today I am posting the second crown model I was asked to build out for the presentations for the show.

I was contacted by Cold Open to also build out the boy kings crown, which was also based on antlers, but with a much thinner rack with a lot more points, along with some engraving in the base rim that I created custom Z-Depth bump maps for. It took just under a day to build and render this out for them.

I also rendered this second crown model out in Final Render using the dirt shader, to add just enough aging to make it match the look and feel from this great series, though the gold is a bit brighter for this crown.

I have been working on the third season for Game of Thrones recently again,and anxiously await the new season along with all us fans.

I will have posts for that work, once the posters show up and the season begins.