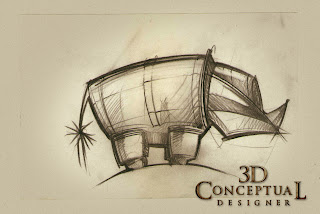 A Robotic Rhino with roller balls for feet.

A Mini-Vacuum Robot with a extension cord for a ratty tail. 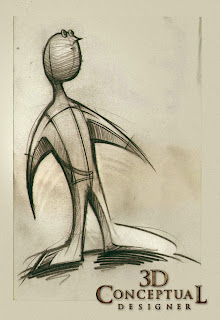 A knife edged arm character with no hands... 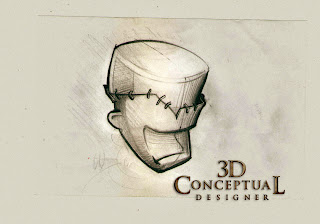 A little Frankenstein with the full top of the head inside the lower lip of the skull, and stapled in.
[ you can see the lite ghosted neck and bolts (unfinished) in there too].

An odd little design, not sure what it is.....It is graphically a character in a box shape.


Personal Project
Napkin Sketching and Doodles Part XXII[22nd]
In this twenty-second installment of the Napkin Sketches, Drawings, and Doodles I have posted, today I put up a set of mostly characters that I have sketched out over the last week during my free time.

I love to draw, and that is the first step in being a proficient 3D designer. If you are just going to build in 3D[ a 3D Carpenter], you need not draw much, though it would help a whole bunch, but if you consider yourself a 3D Designer, then the language we speak is the sketch, and the Sculpture.