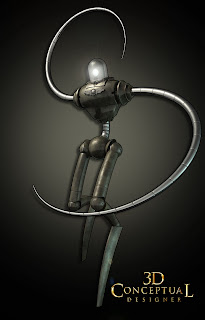 Here is the final Image produced for this Whip Robot from Sky Captain and the World of Tomorrow that I built out while at BLT in 2002 for the posters. 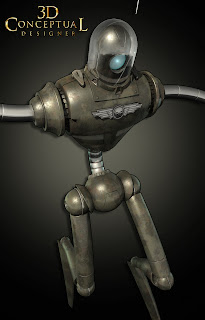 An overhead close to torso view of this robot from Sky Captain. 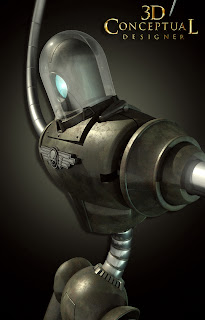 The details I built were based on a screen grab from the film model. 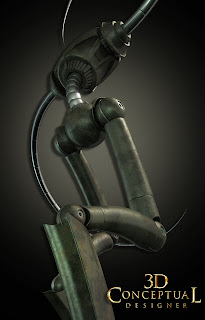 Here is a ground eye view looking up after it just stepped on you! 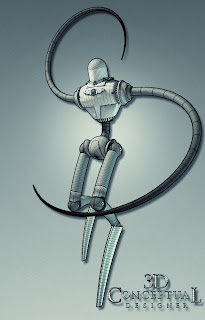 A Mesh-Poly view showing the NURBS conversion on the main body parts. 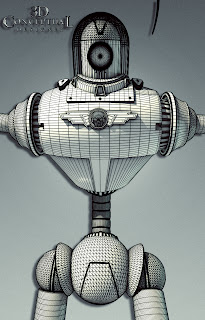 This is a torso view showing the details inside the glass dome for the head.

This is my seventh posting on Sky Captain and The World of Tomorrow, and today we look an another robot I had to build out for the posters for the film, the Whip-arm Robot.

This robot has a very small part in the film ,when the main base of the hero is attacked by a group of these rascals. I had just under a day to build, texture, and render out these views for the in-house Art Directors to use in their comp ideas for the presentation to Paramount and the Director.

This robot was a fun one, with the body being built using nPowers Power NURBS plug-in, and I then converted to them to Polygons for render. Lots of compound molded parts on this one, and I had just got that great plug-in tool for 3DS max over at BLT so I used it on this design.

You can see the other posts quickly below in these links:
PART I
PART II
PART III
PART IV
PART V.
PART VI.