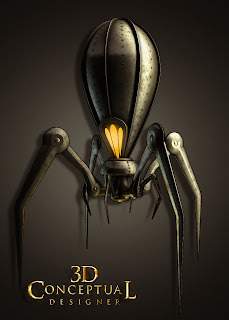 A 3/4 view of the Arachnid Robot I built out from World of Tomorrow from back in 03'. 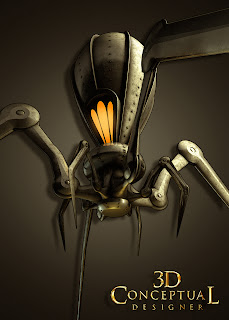 A Low Angle on the Arachnid Robot from the advertising I helped with on Sky Captain and the World of Tomorrow. 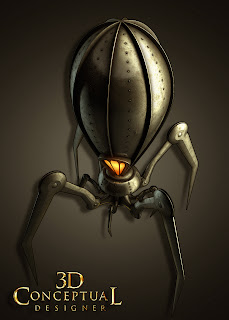 A Birds Eye view down on the spider robot I built back in 2003. 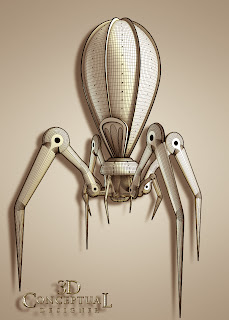 Here is the polygon model I built out for this fun little crawler. 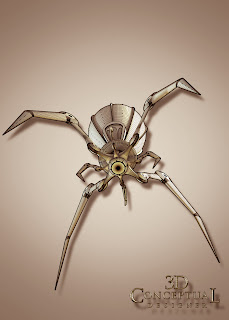 This is a underside view that really shows the 'spider' design nicely for Sky Captain.

This is my eighth posting on Sky Captain and The World of Tomorrow, and today I have posted the Arachnid Robot from the film that I made a 3D copy for the print advertising campaign.

About half my work is reverse engineering a prop from a feature film that is not finished, or we simply do not have access to enough photography, and so I end up building it for the posters, and for WOT[ World of Tomorrow], I did half a dozen various robots from the film for the large Art Direction team for over at BLT.

This one was just over a half day to complete[ about 5 Hrs] and I was able to deliver a few renders for the final presentation of comps to Paramount.

You can see the other posts quickly below in these links:
PART I
PART II
PART III
PART IV
PART V.
PART VI.
PART VII.