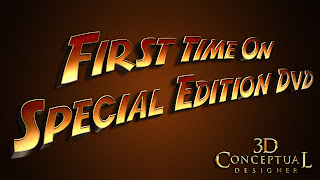 I did these HD Motion Graphics cards for Indiana Jones, that were slammed via After Effects for the Home Entertainment Department at The Cimarron Group. 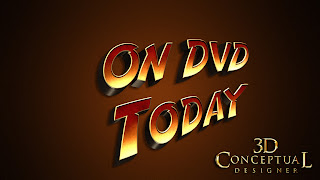 All Type was hand built as there is no exact font. Here is my smallest card. 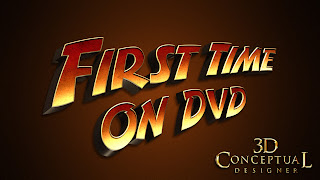 You will see that I bent the extrusion down in back to exaggerate the perspective done in 2D for the Indiana Jones DVD release. 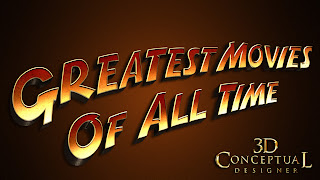 I did about 10 cards in all, every one hand laid out and built in a day for Motion Graphics. 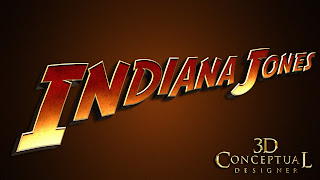 The Main Indiana Jones Title in 3D I built for the DVD Release. 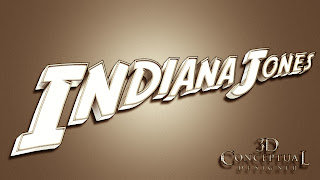 Here is the model as I built it in polygons for Indy Jones IV. 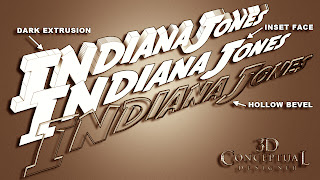 This is fourth posting for the work I did for Indiana Jones four, The Kingdom of the Lost Skull, and today I look closer at the Motion Graphics work I did for the Home Entertainment Department at Cimarron for the DVD release after the film was in theaters.

This work was done to match a 2D effect provided to us, so if you look close, you will notice I did not cap the face of the bevel, but the bevel is hollow, thus creating an internal shadow. The final design we followed from the client was done in Photoshop, and I had to match this 2D faked 3D look in actual 3D, which is always time consuming, as the perspective and bevels in Photoshop are "FAKE" [ and wrong] so you end up bending and twisting the object to match the fake look that was bought off.

Someday a 3D logo will be presented all in 3D, right from concept down to completion, then these types of expensive back-fits making 3D look 2D/3D, would be a thing of the past.

PART III can be viewed here.