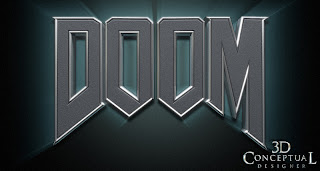 The simple straight on shot of the 3D Doom Logo for the 2005 film, done in December 2004 while at The Cimarron Group. 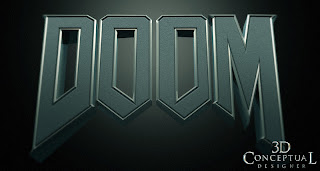 Here is the top logo with a lowered camera and a small 2% lens curve[ fish-eye] added using Final Render. 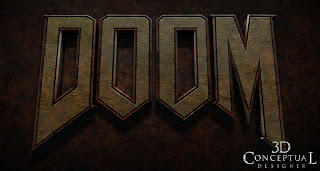 A severely rusted out[ bottom of the Sea] look to this DOOM logo I did. 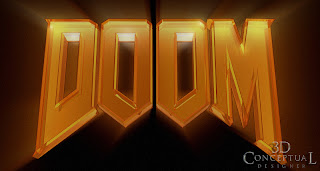 First of these three Orange HOT glowing glass variations on the Doom Logo for the film from 2004. 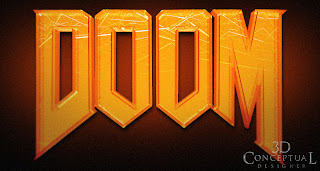 I used procedural cracks in this version of the glass using the Simbiont Plug-In. 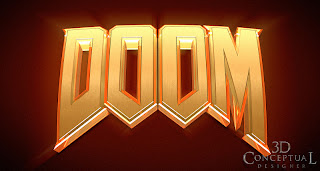 A glass logo with a brushed metal plate top face was standard fare for Motion Graphics Jobs during my time there so we hit that here to in warm tones[ gold aluminum on orange glass base.
Also this has 25% curve used to distort the lens, a great feature built-into Final Render. 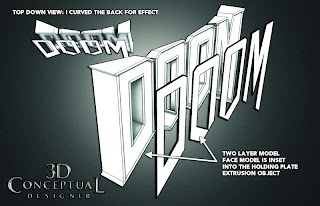 Here you can see the simple two part model I built as geometry, that I curved the back of the extrusion so the edges would drop back farther and lower than the center for all final views.


I had a one day gig working on a 3D title treatment for the film adaption of the famous video game Doom, back in 2004 while I was still and in-house department at The Cimarron Group out of Hollywood , CA.

I worked with Chad Robertson on this job, and Chad and I have done work both prior to Cimarron, at BLT, and after Cimarron through Ignition Print, I always enjoy working with painters like Chad, they inspire me.

The logo design itself, was locked from the game era products, and they wanted to see a few 3D versions as a test, so I provided about a dozen examples to the Print Department there at Cimarron. Orange Glass was a big theme and aged metals, so most were in this family of textures as delivered.

A fun project that did not finish however for us, but as always as a Concept Designer, most of what we do is conceptual and not finished anyhow, but we learn though the process we do in creating these things and get faster and better as designers.