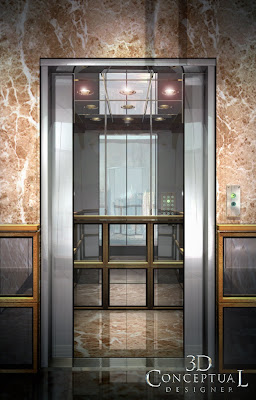 Here is the final Elevator Virtual Set I designed and built for Two Weeks Notice Print Advertising. Pre-GI and about 6 hours work. 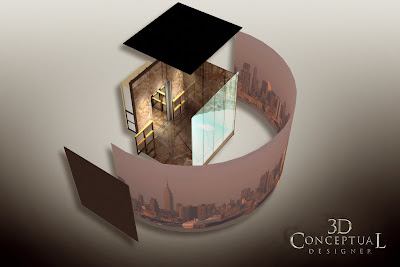 In this exploded view you can see the windows across the hall that are seen in the reflections as well as the backdrop cyclorama. 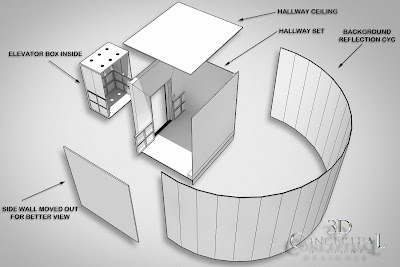 In this wire view I pull the elevator box back to show all the basic sets and lighting areas needed for this highly reflective comp. 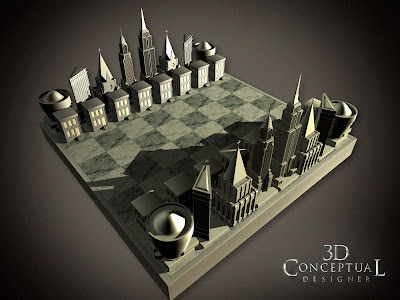 The custom NYC chess set I rebuilt from photos form the film. 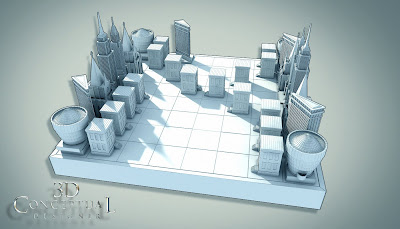 Here is the chess set showing the geometry built in 2002, also Pre Sub-D modeling for me.

Back in 02' I was in-house in Hollywood at BLT and Associates running a 3D dept. and I had a small 3D Illustration task for the new Sandra Bullock film, Two Weeks Notice, and I needed to do a virtual set for a comp. This was one of my first of many sets I built and designed for use in the print comps. I had done Set Design right out of Art Center and I learned the tricks that I still use to this day when I build.

The main set I built was the elevator set, which all I had for reference was two still images from the film showing the design of the architecture so I could build out an elevator. As with real set design I designed everything that was seen and that is it, but since this was a fully reflective set, I had to build things that are only seen in reflection, like the inner walls of the elevator that fact e the camera that are seen i9n the reflection as in the elevator button panel you can clearly see above. So these needed to be built, textured, and lit accordingly. It should also be noted that Global Illumination was brand new and I had just started with Final Render, so this scene is lit the old fashioned way without GI.

I also built out a custom chess set with stylized pieces from NYC icons, including the Chrysler building, Empire state, the Guggenheim, as well as brownstones for the pawns, a fun little piece to make too.
Cheers, THOM
Posted by 3Dconceptualdesigner at 10:16 AM