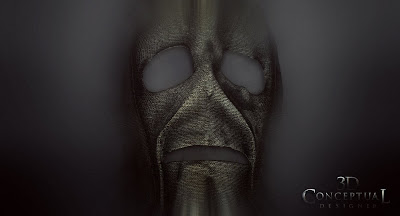 A frame for the Motion Graphics asset I built for the film, "The Strangers", main killers mask. 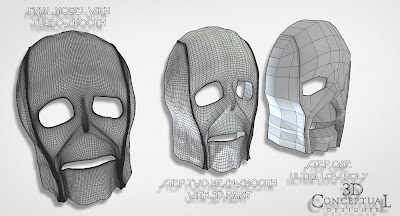 I built a Poly Model first, did one smooth pass, then collapsed and added more details as seen in this quad Sub-D model image above. 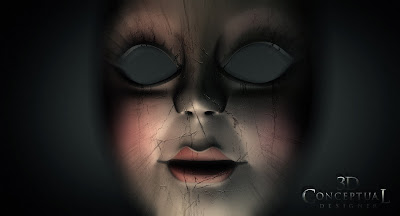 One of the girl killers wore a "Betty Boop" looking mask as I recreated above. 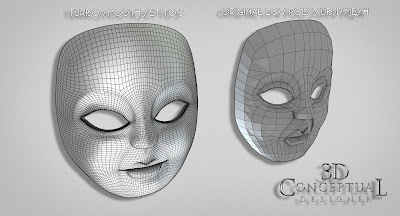 Here is the mask base model i made along with the final Turbo-Smoothed version next to it. 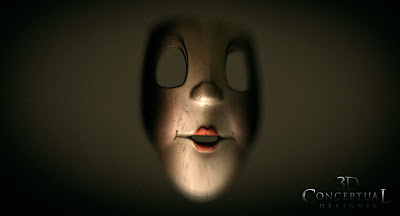 The final Mask I recreated for the Trailers for the film The Strangers back in 2005. 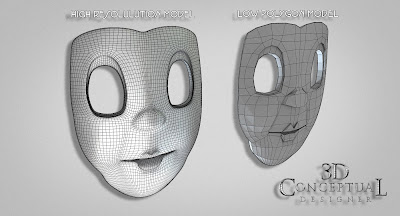 Here is the Quad Model view showing both the base model and the smoothed model used for this mask image.

I ran a 3D Design and Animation Department for six years in-house at The Cimarron Group in Hollywood up through the winter of 2009, and this was one of my last projects.

I got to work on this with Scott Fliesher whom I had also had the pleasure of working with at BLT and Associates in Hollywood as well years earlier, and it was always a pleasure working with him as you get familiar with what they expect as an Executive Producer, and you build up a relation with them to fill the expectation in design when doing Motion Graphics.

We did a bunch of MGFX teasers for films that had no footage shot yet to use, so we custom created all assets ourselves, and they were called a "Graphic Teaser Trailer". The above masks I built from shots from the film but in this case we had footage, just nothing high enough in resolution to use for the trailers, so I was tasked with rebuilding three masks worn by the killers in the film that attack the family.

Once built I did a few shots and some short animated moves on the masks that were presented with the trailers. A fun fast one day project to model, texture, light, and animate for our Motion Graphics team for The Strangers.
Cheers, THOM
Posted by 3Dconceptualdesigner at 10:06 AM