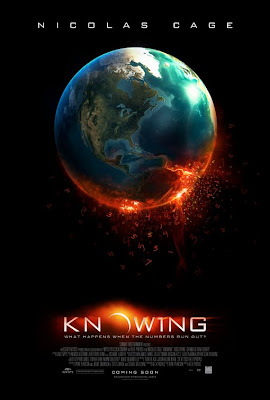 The Final One Sheet contained my 3D Logo and 3D Earth Render.
[It's always cheaper than a stock image to use a 3D Earth Image]

A Single Point Bevel with a hot and cold lighting scheme.

Here the Logo was done in a warm HOT glass material.

A darker low light concept for a logo hidden in a darker comp.

Though the type was locked in for us before we started, we did play with replacing the crescent moon with a full "O" as seen here.

Here is the Earth in four stages from normal, to all clouds gone, to dry and heated, to a fire ball.

A street scene that was filled with people rioting in the lower third done in various states for a Living One Sheet.

Lady Liberty done in a few different states of dismay.

We had done a few projects for Summit Entertainment while I was in-house at The Cimarron Group, most notably the Twilight series, so we were given this Nicholas Cage project called Knowing, a Sci-Fi film about the end of the world via a Sun flare so big it literally cooks us, so the visual concepts for selling this fun property were fully explored.

What started out as a Logo exploration of doing a set typeface in basic gray or stone and then doing various hotter metals and hot glass, then translated into concepts for animated posters, or what is referred to as "Living One Sheets".

I also did a few scenes that required a multiple pass at the render that the Art Director then painted in between. This is so much faster then a single CG scene, and allows the designer full control as they can take the before image and paint in ash or heat in the areas they want, and do multiple variations. These multiple images were also good for a Living One Sheet too.

A living one sheet or movie poster is a video poster basically that can be printed on multiple layers of a lenticular film so it moves when you walk around the poster giving it "life", hence the name. It is also played on a HD monitor in a mounted portrait position as well, at an obvious higher cost.

I did a few concepts with a before, during, and after effect, of what would happen if the Sun did flare up and cook the earth like we were selling. I did the earth image, a basic street scene, and paying homage to Rod Serling and the original Planet of the Apes we did the same treatment to Lady Liberty, The Statue of Liberty.

The living one sheets were not finished though the concepts were fun to explore and design. I did finish both the text and the earth image for the final poster one sheet, and the advantage to using the 3D earth image is that it is owned by us with no fees associated with using stock photography, so in the end the client pays less, and owns the image made, all the while having absolute control over the lighting angle and any other detail needed, that is a Smart 3D Image.
Cheers, THOM
Posted by 3Dconceptualdesigner at 8:47 AM