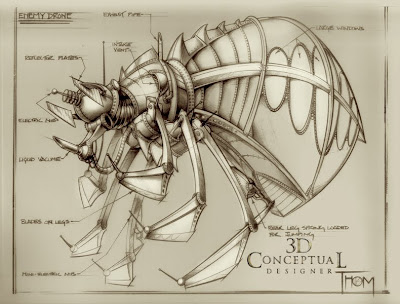 The Exterior of the Steampunk Flea Design. 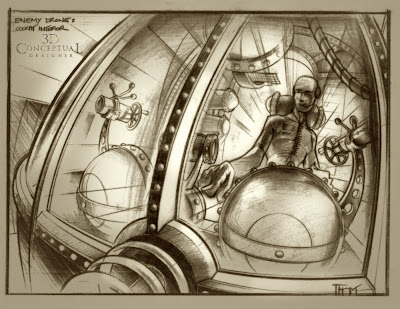 A Close Up of the Cabin Interior where the Driver works from. 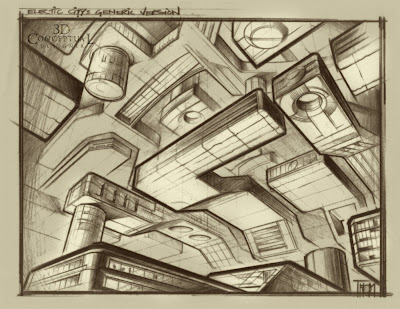 A Typical shot of the Motherboards used to build these micro Cities.

Before I went to Disney Interactive I had a very fun freelance job for a ride film being made my a major US Circuit board Manufacturer. The film used the circuit boards as a miniature city where this giant "Flea" chases you around for the ride. The flea was to be what is now called "Steampunk", but back then it was to be a "Jules Verne look", with Victorian cast iron elements, and lots of metal and rivets.

What you see was recreated in 3D [ Light-wave] and animated to create the film. I designed the main Flea interior and exterior as well as the the way they things would animate. I also did a test section of the city showing the basic look that was duplicated to give the feel of flying through a huge city.
The flea itself, uses huge spring loaded rear feet that coil up and launch while destroying whatever it launched off of in the process. It was also steam powered with the big furnace and pipes coming out of the body. The close up shows the driver adjusting the "cheek" reflectors to aim the lightning at the ride guests. The city shows the small detailed windows inside the circuits.
Cheers, THOM
Posted by 3Dconceptualdesigner at 11:01 AM