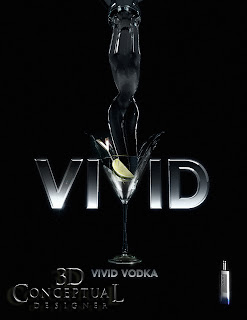 The first comp I built out for a pitch to Vivid Vodka a few years back was the female form in the pour of the vodka. 100% 3D virtual set-up. 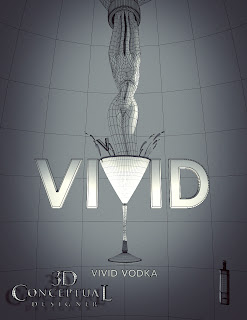 Here is the shot of the Geometry for the scene for Vivid Vodka. 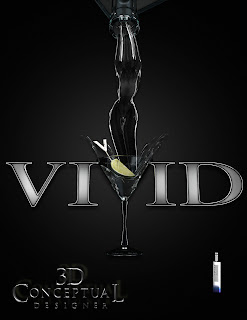 A new Typeface with an inset face, like I did on Sweeney Todd here. 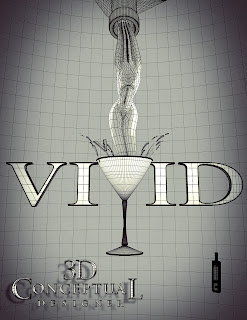 The shot of the 3D Scene set up for the revised comp. 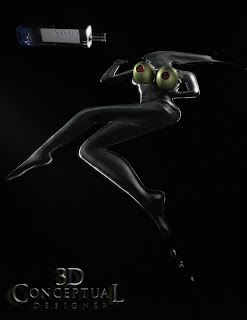 With this other comp the spill of Vivid Vodka was to look like the "Trucker Sexy mudflap babe" as I was directed to build it out with a few olives for the 'Gazongas'. 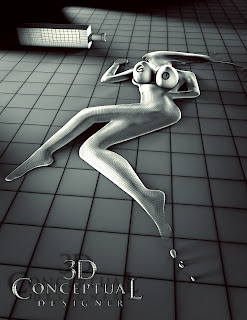 Here is a Polygon shot of the final comp I built to pitch Vivid Vodka back in 09'.

A little over three years ago, I was still an in-house 3D Design Director at The Cimarron Group in Hollywood CA. I had prior to that Gig set up a 3D Design Department at BLT and Associates, their main competitior, so I was very well prepared for a fun job like this one.

Vivid Vodka was a new product launch that we pitched for back in 2009, and I was tasked with building out the full virtual shoot since we did not have a single asset, including the bottle of Vodka itself, [ just a picture], so I was tasked with a build out of the items in 3D

Now with the womans body prominent in all the comps I built out the files in 3D as this type of work is where 3D really shines as you can create these fanciful images as if they were real, applying real world materials to them to achieve the look you want.

I built out two basic ideas with an alternate on the type design for one, while the second was a spilled puddle in the shape of a sexy female.

I had the olives from my Las Ramblas shoot here, so I reused that and the martini glass I already had in my stock library as well to speed things up.