The main delivered look for the stereo-lithography, or 3D Printing for the standee for Snow White and the Huntsman.

A close up of the middle of the logo in gold as finished for Snow White.

A simple shot on white was originally the test image I did to match the 2D finish.

Here is the polygon view showing both the low resolution base mesh I hand built, along with the subdivided mesh with endless smoothing [ depending  on your machine that is]. 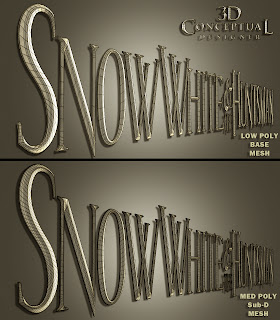 An angle on the details showing the small flange around each letter. 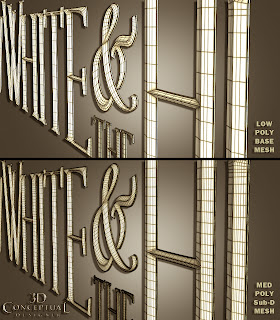 Here is another angle showing the higher[ sub-division poly model] and low poly base witha bit of draft designed into it to pull from the mold.

I regularly build out 3D assets for my clients to use in various posters or Motion Graphics work, but this project was a bit different as I was hired to help with a Stereolithography 3D print project for the Premiere of Show White and the Huntsman released this Summer in theaters, and now o On Demand.

I have built out hundreds of 3D logos with a hand built Single-Point-Bevels type look that is very popular still, but for this project my Industrial Design hat was put on as I needed to help create a "Buck" for the vacuum forming of the 3D type to be built as a huge standee.

The first and most important thing I addressed is the flange. The flange is the lip that would be needed all around each letter so it could be glued to the base-plate with more surface that was flat, so I designed to scale this feature in my STL[ stereolithography / 3D Printing] model.

I also had to add some draft to the file so it could be pulled off the buck-mold, and I was trained in mold-making at Art Center, so I was able to access that training for this quick half day gig.