Here is the final Image they picked rendered at 6800 pixels wide for the billboard finishes for the 3DX Film Festival back in 2008.

We went with a Tobacco Green look to a few comps, I was playing off a Direction the the Print Department had , so I matched it up here.

When I spend the time to do a more advanced surface to a simple logo it is perfect for a glass material since the available faces in the surfaces make for great refractions and caustics inside the type.

A version with the extrusion at 1000% deeper for a Motion Graphic pitch.

Here is an ambient render showing the mesh smoothed object with a very dense face count as a Quad model.

Here is that same shot of my 3DX logo with the Subdivision removed.

A behind the art look at the various stages: On the Right is the final mesh with two FFD's[ Free-Form Deformation Jigs], In the MIDDLE is the model with just the FFD for curving the face, and on the far RIGHT is the flat original Pro Boolean. 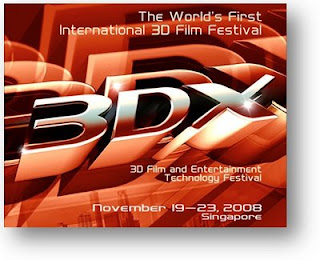 Here is the way they used the graphics for the event.


With thousands of 3D logos behind me, a simple project like this is straight forward, but it can be done in various ways.

The super cheap way is to basically bevel a spline, throw materials on it, and hit render. If money and time is low this is the way to go.

However, if you want a bit of finesse, that can be added to any logo.

For this project we had a client in Singapore who needed a 3D logo based on the existing design, but done in 3D for the posters and the Motion Graphics work to follow, so I tackled it.

I  wanted to have a softer bevel with a bit of curve to the face, since a computer flat face on any logo has awful reflections since it is just a flat mirror, so a trick we all learned at ACCD for car design is to add some crown[ curve with a high point] to the surface, so I curved the face back to achieve this.
This cannot be done to any standard bevel due to the limitations in how the triangulated face is made, but in 3DSmax I use the n-Power built in Pro-Boolean tool and make the results as "quads" and BAM, I have a surface that can be adjusted so much easier.

Posted by 3Dconceptualdesigner at 6:29 PM