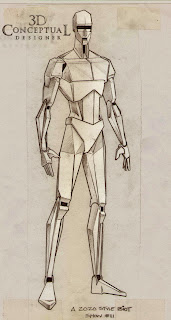 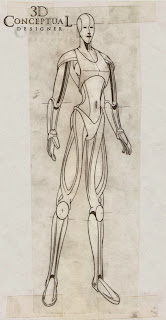 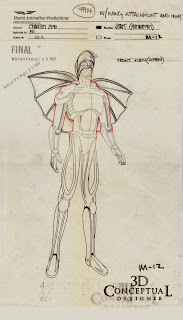 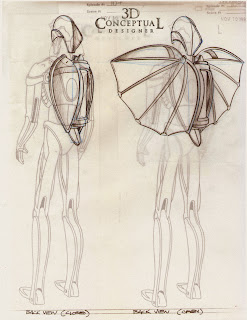 Here is the back view with the wings both in and out with the jet between.

This is my 97th post for the work I did on the TV show, The Phantom 2040 from in the early ninety's, and I have some B.I.O.T. sketches as well as a fun Jet Pack for the main character Graft.

We had more than a few flashback sequences being that the basis of the Phantoms story, is that it is passed on from father to son, so there is not just one Phantom, [ Kit is the 23rd BTW]so we regularly would go back to one of the other Phantoms.

You can see the older BIOT is sharp edged, and 'stealth' in look, compared with the softer wrapping and curved Art Nouveau shaped I used for the main look of the show for the year 2040.

In the early 90's The Rocketeer came out, so one of the show scripts had a jet pack for Graft that was similar. I made it a bit different in function, where the solar wings would flip out a bit to help steer and absorb energy for the jet in the middle so it was a bit of a transforming item.