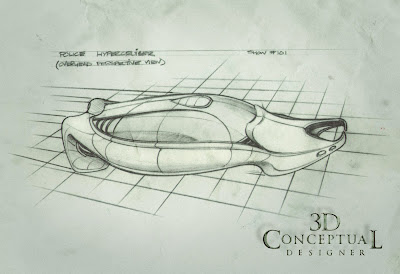 A 3/4 top view of a Police Hyper Cruiser for Sagan Cruz the Main Character that helps The Phantom from inside the Force. 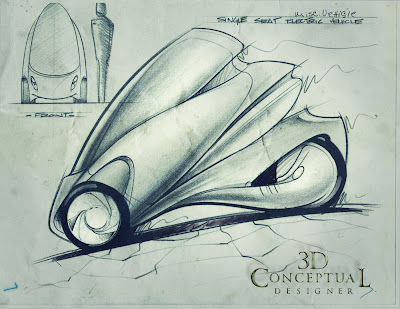 This micro-car was actually a modified version of my A.C.C.D.-C.A.L.T.Y. project car, just cut in half to a one seater. It can be viewed here. 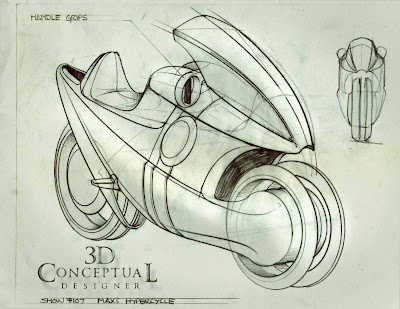 Max chases and is chased by The Phantom on his Hyper-cycle as max tries to catch him on this one. It was only used in a few episodes though. 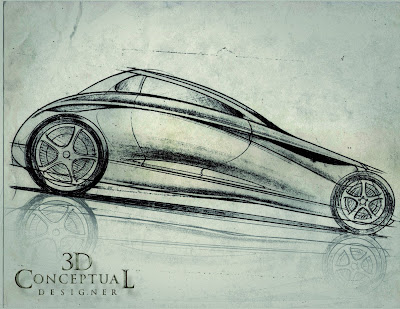 A second Hot Rod Design for Max the villians son in the show.

In this 56th post on "The Phantom 2040" television Animation Series I have put up some more of the transportation designs I did for the series, as there were always a lot of vehicles we needed designed for the 52 episodes.

As a Car Design major from Art Center in Pasadena California, we wish for jobs like this. Futuristic Flying Cars and Motorcycles, I couldn't have asked for a better job had the master Syd Mead Himself, assigned it to me. FUN!

Above you see some quick designs I did for a few cars ,and Max's Flying Hyper-cycle that he ends up chasing [ and being chased] by The Phantom on. I gave his bike circular grips based on the workout system for the wrists and you rotate the handles rather than twist the wrist.

I also cut in half a CALTY project concept I did years earlier at School for the Micro Car. A fun time as I always had a few flying things each show to come up with a design for.
Cheers, THOM
Posted by 3Dconceptualdesigner at 10:31 AM