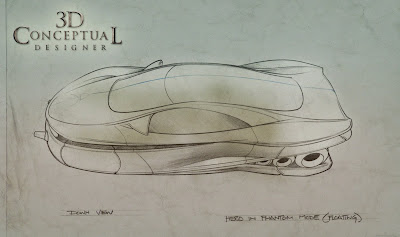 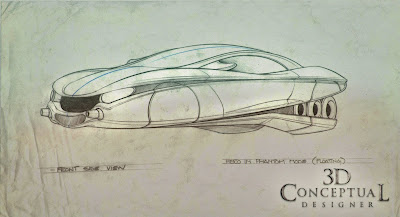 Here is a closer to elevation angle of the floating car used in all 52 episodes. 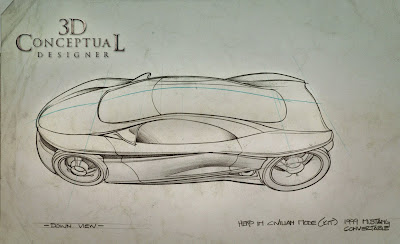 A 3/4 top view of the Mustang when it was in "civilian mode" so Kit Walker could drive it to school.

A Re-post form a vehicle series I did last year, but this was the main sketch of the simplified Here vehicle[ The non-Mattel version] 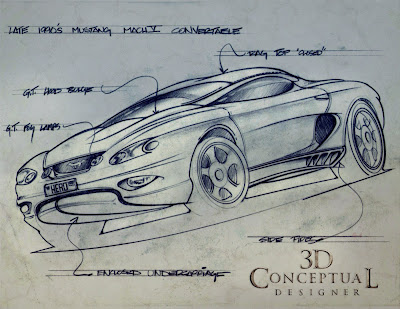 This is the convertible version of "Hero", closer to the concept car Ford did in around that time, and this version had lots of bells and whistles.

In this 52nd post on "The Phantom 2040" television Animation Series I have put up the rest of the scanned sketches I have found for Kit's Flying Mustang called "Hero" based on the original characters Mustang Horse he rode.
I had posted one shot in a prior post focusing on various vehicles that I designed for the series and this post covers the Hero once finished with development. As a Transportation Design Major from Art Center in Pasadena, I long for jobs like this one, a future car that hovers, what could be more enjoyable. It should be noted that the 199 Mustang was a future car in 1993 when I sketched these, which makes the designs I did almost 18 years old now. There was a concept car mustang done in 1993 that I used ques from the reach the look, but I modified them to my tastes to what you see above.

I did two main versions of the car, one in basic driving mode that was used when Kit Walker was Kit, and the second was when Kit transformed into the Phantom and the car floated. I also did a much more complicated version more like a toy with 10 pop out panels and such that you can see here, but in the end we simplified the design for production.
Cheers, THOM
Posted by 3Dconceptualdesigner at 11:11 AM