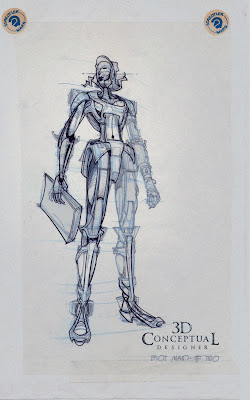 One of the first BIOT's I designed was this Female Maid[ note the skirt]. 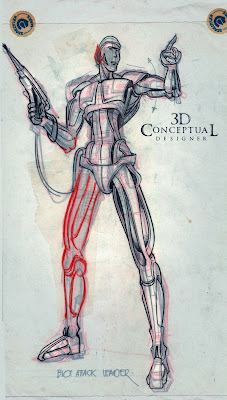 A BIOT Attack leader overlay I did, very early on as well. 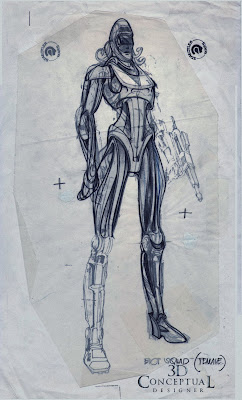 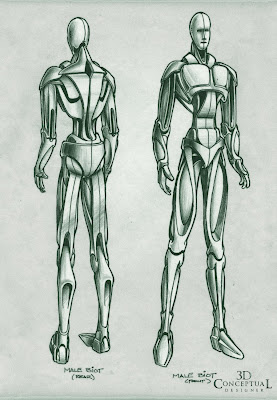 A re-post of the FINAL design Male. 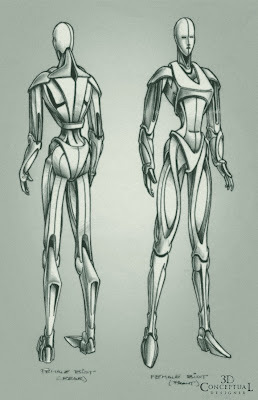 A re-post of the FINAL design Female.

In this 45th post on, Hearst Animations, "The Phantom 2040", we delve into some of the early develpment sketches I did for the robots in the series called BIOT's.

As Art Director, I based the "tall and thin" artistic theme that would work well on Peter Chungs characters we had designed that were 12 heads tall and gaunt or super thin, so I applied the proportions to the robots.

The designs that were given to me were standard cylinders and blocky shapes, whereas the theme of Art Nouveau and wrapping and interlocking shapes was needed, as well as the "tall and thin" look, so I did the designs as an overlay over another persons initial sketch.

I had alot of fun on this as Robots are always fun to draw for a ACCD Trans major,and being both male and female robots, they needed to look different enough so I used the bikini top theme with a little "side boob" hanging out to show that the BIOT's were indeed femlae. I also used a higher cut bottom on them than the males as well. In 1993 the "thong" was just getting popular and I probably would have given them some "floss" too. :o)

I eventually refined the sketches and the finals were a bit more refined but you can see the History in the development here.