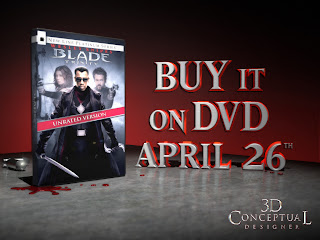 Here is the final date card for the DVD release of Blade Trinity the third in the series. 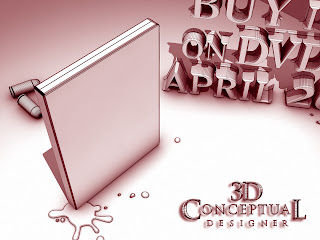 This is frame 007 of the move as we start over the top of the scene looking down at the blood and bullets on the table. This model was all built as a high resolution model[ pre-quads] 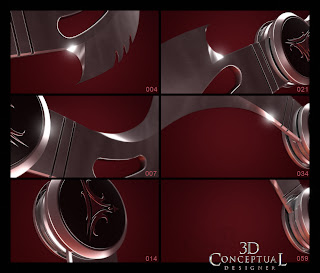 This style frame board shows the sequence for the boomerang wipe. I rendered it against an atmospheric light to get the right gradient. 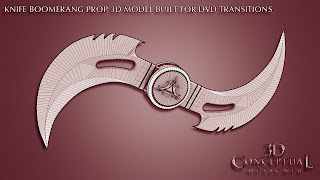 Here is the quad view of the 3D model I built for that shot above.


Client: via The Cimarron Group.
Art Direction: Myself, and their whole 5 person team.
Project Date: January 2005.

I worked on over 100 motion graphics projects during my 6 year stay at The Cimarron Group, and I had an occasional Home Entertainment project to work on , and I was put onto the project for Blade Trinity, for them.

I was first tasked with building out the knife boomerang that blade uses to catch the Vampires and they wanted to use it to wipe between cuts in the piece so I built it out, rigged the basic rotating model, and animated it through the scene.

It ended up finishing out as well as the the 3D move on the date card. I originally had silver bullets and blood in the comp, but the MPAA nixed them both.

Finally I animated and rendered out a mini comic book that came with the DVD for a quick end card. Used the same 3D volumetric lighting to cast rays from the pages at the book opened and closed.

Cheers, THOM
Posted by 3Dconceptualdesigner at 10:01 AM