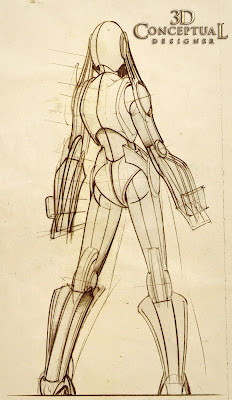 Here is the base blocking sketch drawn transparent, to 'draw through' all parts in 3D to ensure proper perspective and alignment for Sagan Cruz for The Phantom 2040. 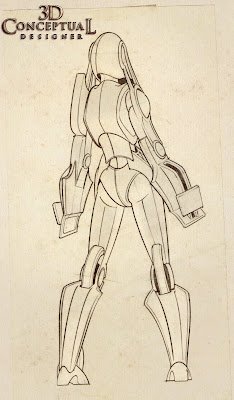 The Pencil Line art final was done on velum and then it would go to the Character Inker for the final character sheet. 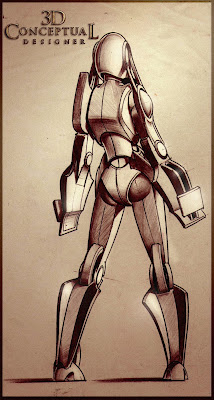 In this, my 73rd post on the Hearst Animation Productions hit, The Phantom 2040, a television animated show from 1995, I have put up a detailed series of scans of the design process for the character Sagan Cruz in Armor.

What was fun in this process is, was to make the armor distinctly 'female', so she was identifiable from the bulky male Enforcers. First was the proportions were hourglass body thin legs etc, and a stance that was female. ALso the Female B.I.O.T., had a 'bikini' bottom with the legs articulated out, so I used the same design element and made the butt cheeks hang out below the metal bikini bottom.

She also had gloves akin to hockey gloves you'd see a goalie wear and these had battering rams that slid down them in the show. Here is a front 3/4 view posted prior as a color key.

The process itself was straight forward, find a pose, lay out the blocking, do the final pencil line art, and shaded versions are last. Enjoy the posting.

There is a TAG on the list to the RIGHT, but you can click this as well.
Cheers, THOM
Posted by 3Dconceptualdesigner at 9:40 AM