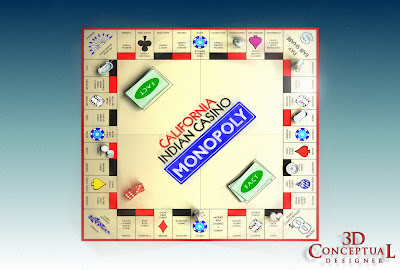 The Spot opens with an overhead view of a "Monopoly" game board showing Casino's Named for the 64 Casino's in California. 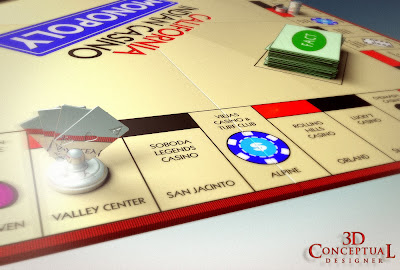 We fly down to the board level to read the names of the specific locations of the Casio's. 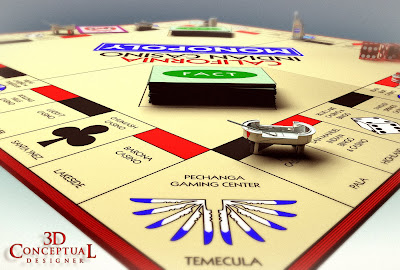 We fly around the game-board showing more casino's as well as continue to tell the message with flying in game cards. 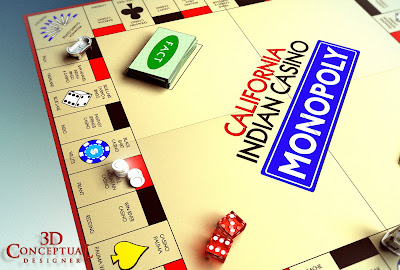 As we fly out from the board we have finished the 20 second 3D animation and the game board flips. 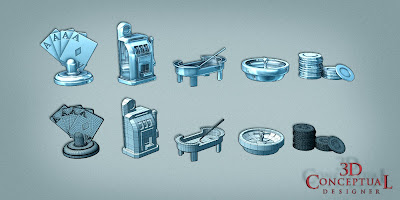 A view of the ba game pieces I designed for the Monopoly game-board for the political TV spot while at The Cimarron Group.

While running a small "One Man Army" TM Bo Opfer 9K9, at The Cimarron Group in Hollywood back in 2004 I worked on a few Political Advertising campaigns for Arnold Schwarzenegger who was the newly elected Governator for our state, on a concept of "A Monopoly in Indian Gaming".

I created a monopoly board and custom "tokens" to place on the board. I set everything up and brought in my good friend and Animator extraordinary, Dean Folwer of Machine Films to created the motion to bring the concept alive. The spot finished and aired in 2004.

You can view the spot in rough form, on my You Tube Channel here, enjoy!
Cheers, THOM
Posted by 3Dconceptualdesigner at 12:25 PM