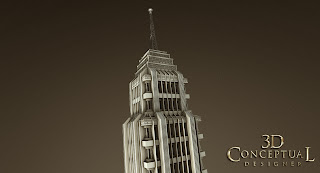 The main shot of the Radio Tower Icon from Sky Captain. 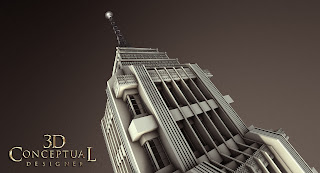 A fisheye dutch angle on the tower a bit closer on this render pass. 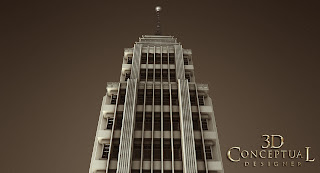 An up angle with the camera closer to the building tipped upward to the sky. 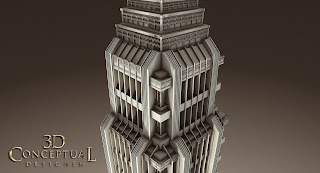 A bit of a Birdseye down angle on the Radio Tower Deco Building I made for World of Tomorrow back in 03'. 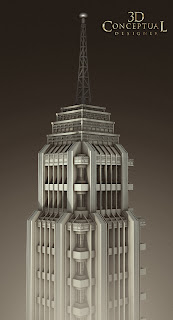 A One Sheet proportion comp for the Radio Tower. 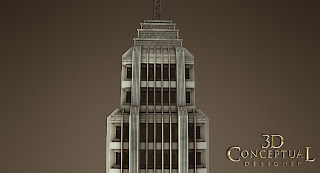 A front view a bit closer with some added lens curve. 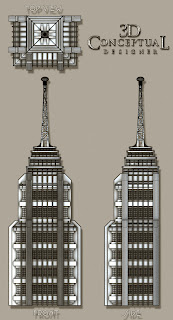 This is a multi-view shot showing the building is a 3 sided asset with no back built since it was never to be seen, and in advertising it is about speed and time making the cost acceptable.

This is my tenth posting on Sky Captain and The World of Tomorrow, and today I have posted the radio tower building I designed and made for a series of movie poster ideas for the film.

Early on in the design process they were visiting the old serial detective shows from the 30's and 40's that would be seen in the theaters back then, and they wanted to harken back to that early black and white entertainment era, so we discussed the iconic radio tower seen in logos and through out the era to show an animated radio wave from the tip of the antenna, so this was our icon, and off to work I went.

As a thematic designer, they simply came to me and said to do a deco building with a heavy iron radio tower on top, and off I went to design and build simultaneously in 3D studio Max.

I provided a series of various angles on the 3D virtual building that they used along with a few logos I did too and presented the teaser ideas to the client.