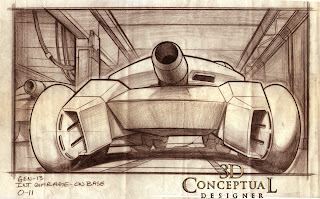 Here is a final background I did using a tank designed by Shayne Poindexter a fellow ACCD grad whom I worked with @ Hearst Animation. 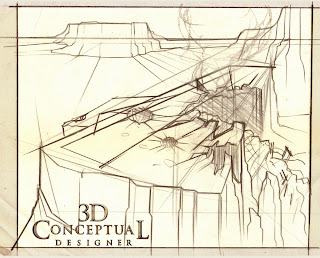 In the final act the main airbase is decimated with craters and I helped develop the look of that destruction in this under-drawing layout I did. Final was a 16 field size. 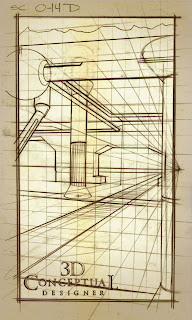 The main Hangar inside as a vertical 12 field PAN.


I found a few added drawing that I did back in the 90's on the Wildstorm Productions GEN-13 Comic Book Movie adaptation, so this is my second post for the work I did.

I worked on some background layouts for the production, and did a few dozen layouts used in the film, and today we look at two under drawings and one final piece I have located.
I have not located any copies of the finals for the other two, but the roughs show what I was going with, and this was a basic part of remote working for them, as I would rough out every shot fast as an under drawing first to get approval on view design and proportions.
If approved, I would then move to the final overlay velum drawing final to deliver as seen in the top image above for Gen-13.

I am a huge fan of the designer J. Scott Campbell, so to work on this was a dream job for me, and I got to briefly meet him at the screening where I got these.