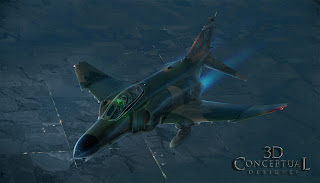 A night version in Camo was used to start off the process for the F4 color design for Red Dawn. 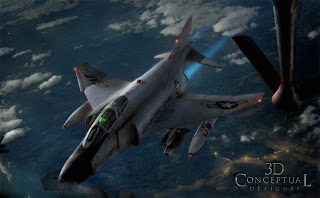 A lighter version with grey paint is what we went with for the next pass.

Here is the final delivered Concept painting I did for the graphics and aged look to the F4's from Red Dawn.

A Daylight converted shot done from the above painting. 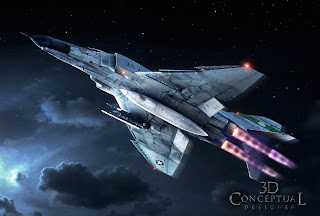 A final here shot from underneath the plane at night with the afterburners full bore.


My very first job out of Art Center in 1992 was indirectly connected to Rhythm and Hues studios for the Mazda MX-6 here, and to return many years later to work on another fun project was a pure joy.

This was a short in-house temporary gig for a few weeks back in 2010, so I worked out of their great facility, as well as was there during the move to the new place.

I was brought in to help create the look for a few items used in the film and the main one I worked on was an old F-4 Phantom from the Vietnam era.

The job was to create the look of an old worn out jet that was used for the national guard in Spokane WA., so my first task was to do some research on the area to find some graphics that were used by the local National Guardsman out there to add the realism to the 'fictitious' plane.

I grabbed a few badges and icons and created a few myself as well and proceded to paint over a stock shot of a plane to completely repaint the exterior. I aged the plane paint and metals to show that it sat a lot and had rust, wear, and aging.

As is done with Style frame Matte paintings like these is you do a day/night shot , which is simply to convert a daylight photo to a night one since the planes were used in scenes in both environments.

Posted by 3Dconceptualdesigner at 12:59 PM